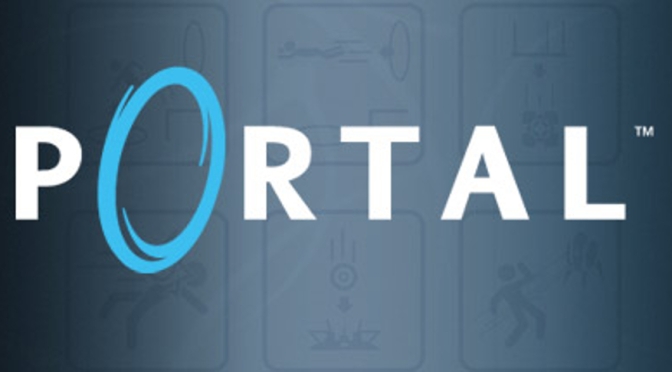 I’m a little late to the party on this one but I finally beat Portal. It’s an ingenious puzzle game that doesn’t overstay its welcome. In fact, I was befuddled that it was over as quickly as it was. Since I’d heard so much revelry and acclaim for it and witnessed the cultural impact it’d had in the gaming space I just figured there’d be more of it. What was there engrossed me though. The increasingly complex puzzles were mentally stimulating and the enigmatic GlaDOS’ darkly humorous speech had me chuckling well into the few hour experience.

The game is built around the portal gun which allows users to shoot portals on flat surfaces. The portals are connected and can be easily referenced as an entry and exit. At its most basic use, I could place a portal on ground level, shoot the other portal on a wall above a higher level and use the portal to reach higher ground without using a ladder. Through the game’s nineteen test chambers, the quandaries were rarely this simplistic. The way I had to manipulate the portals was fascinating and thought-provoking. Dropping into one and utilizing the momentum to fling myself across the room was always amazing.

As I mentioned the game has nineteen test chambers that lock progression behind increasingly difficult puzzles. There are no other lifeforms present although observation windows and empty chairs indicate there were at some point. Guiding the player through these chambers is GlaDOS, a disembodied mechanical female voice. Her statements are delivered with a sense of dry, deadpan seriousness that are made clear when her motivations are discovered. Things are not what they seem and while there is no narrative, there’s an abundance of environmental storytelling that allows the player to fill in the gaps themselves. It all culminates in an appropriate ending sequence that was riddled with GlaDOS’ hilarious interruptions.

For most I’ve probably revealed nothing new about this game. Portal sent shockwaves through the gaming culture when it arrived in 2007 as a part of The Orange Box and is still highly regarded and oft-discussed. I’m glad to have finally experienced it and would recommend it to those who have yet to do so. The game was brief but left me both fulfilled and wanting, in a good way. I can only imagine the impact the modding community had on this title and I’m excited to see the crazy stuff they came up with.