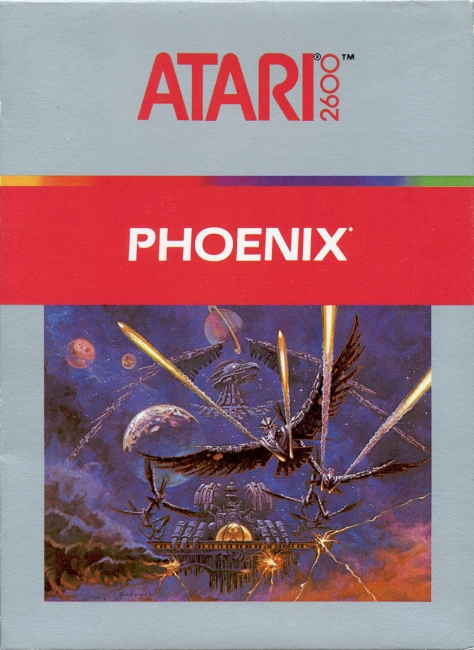 My Atari 2600 has been getting some love this week! Now that I’m done with Vanguard, I’ve returned to Phoenix, which I was playing beforehand. In fact, it’s the reason I’m playing these games at all; my recent acquisition prompted me to hook up the console and try it out. Like Vanguard, it’s a space-themed shoot ‘em up (you want me to stop there, right?) although being a fixed shooter, it has more in common with its contemporaries, such as Space Invaders and Galaxian. I enjoyed this game’s fast-pace and responsive controls, the most important factors causing my return to it.

As was the case with Vanguard, Phoenix was originally released in the arcades courtesy of Centuri. At least, in the United States; elsewhere it was published by Taito. It was introduced in 1980 and as best I can tell, was the sole output of developer Amstar Electronics. After obtaining the rights to produce a home console version, Atari outsourced development to General Computer Corporation and the final product was released in 1982. A little research reveals Michael Feinstein to be one of the port’s programmers and likely, the project lead.

The objective of Phoenix is to destroy the adversarial mothership. To reach it, players must defeat four waves of birdlike enemies. The first two waves are host to rudimentary foes that could easily be mistaken for Space Invaders fodder. The next two waves feature enemies that move faster along less predictable paths. These foes are larger and have wings that can be destroyed, but they regrow if the core of the creature isn’t shot. Finally, the penultimate stage hosts a large alien vessel that has to be whittled away until the player can eventually strike its alien pilot. With the leader destroyed, the game recycles these stages in perpetuity.

At this point, the game becomes about setting a high score. I wasn’t drawn into playing the game for so long because of this element per se, but having a competitive nature didn’t hurt! I found this to be a challenging game and I believe I’ve only been able to make it past two full sets of stages thus far. Each time I die, I feel like it was totally on me. Because the player’s spaceship moves quickly and is so responsive to input, I’m always left feeling as though I could’ve evaded the shot that killed me. This draws me in and makes me want to continue improving in an effort to get just a little farther. So even though it’s challenging, it feels like the scales are evenly tipped between the player and computer.

Phoenix is a stellar shoot ‘em up and as described is a challenging, fast-paced, responsive game that I wanted to continue playing in spite of the constant death. There’s more to it then my brief descriptions highlight, such as reaping more points for destroying closer enemies, but this tactical element didn’t factor into my sessions. That’s the sort of element that I foresee giving the game a longer tail once I move beyond just trying to see new waves and convert over to strictly score chasing. Until that point, I’m content to continue enjoying the game and my Atari 2600 as I have been. 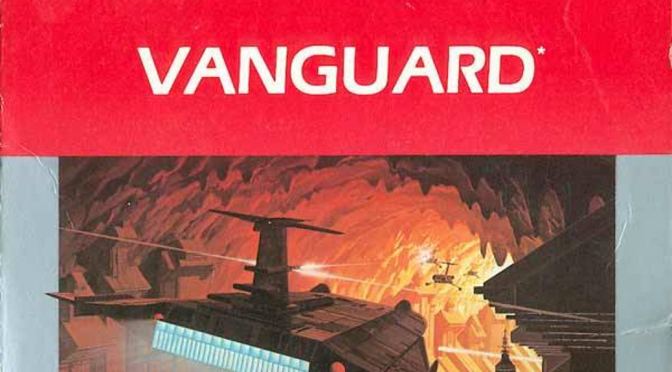 Vanguard is a space-themed shoot ‘em up from the early 1980s. Stop me if you’ve heard this one before. Oh, you have? That’s right; basically every other video game from that period was a space-themed shooter. This isn’t bad in itself, there were many good games that could be reductively described as such, but so many were innovatively lacking. That’s not an issue with Vanguard.

It debuted in the United States during the “golden age of arcade games” in 1981 courtesy of Centuri. In its native Japan it was released by SNK and purportedly developed by TOSE, although they don’t want you to know that. My focus isn’t on that version though (haven’t played it) but instead the Atari 2600 port. It was released in 1982 (or maybe 1983) and was ported by Atari, or rather Dave Payne at General Computer Corporation.

One thing that set Vanguard apart in arcades was its status as a multidirectional shooter. When it was originally released, it featured a joystick to pilot a spaceship and buttons arranged to fire in one of four directions. In essence, it was a dual-joystick shooter, minus a joystick. With a joystick and a single button, the Atari 2600 wasn’t the ideal platform to port it to, but it was the most popular home console at the time, and Dave Payne ultimately made it work.

The solution was to have the button govern the player’s attack along with directional input from the joystick. To fire to the left, push left and press the button, etc. This works, but it does present an issue: the ship continues to move in the direction the joystick’s being pushed. Initially, I found it difficult to attack enemies that were heading towards me since my attempts hastened our collision. Accordingly, evasion became a focus of mine when dealing with faster enemies. Progression, as best I could tell, was dependent upon destroying enough enemies or reaching a points threshold, so confrontation was inevitable. Ultimately, I had to direct my aggression towards easily targeted enemies while zipping around others.

Progression presented another unique aspect of Vanguard: stage variety. There’s some semblance of a story that involves human space colonists attacking an antagonistic alien species on an asteroid they call home. The caves and crevices that the player flies through are set against distinctive backdrops and feature varying enemies. Before each stage, the player is shown their position within a tunnel which corresponds to the direction of forward momentum in the succeeding stage. This entailed the game featuring a mixture of horizontally and vertically scrolling stages, something very rarely seen in the genre.

Despite an awkward control scheme, my time with Vanguard remained fresh thanks to the variety of stages and enemies I had to contend with. I was able to adjust and devise strategies to defeat enemy waves, although I never became totally comfortable within the half-hour or so I spent playing. In this time span, I beat the first set of stages and it’s my belief that they simply repeat in tougher iterations, ad nauseam. It’s a remarkably colorful game and quite detailed considering the platform but is audibly devoid, save for a handful of sound effects. Vanguard is definitely more than just another space-themed shoot ‘em up and is well worth a look for Atari 2600 owners. 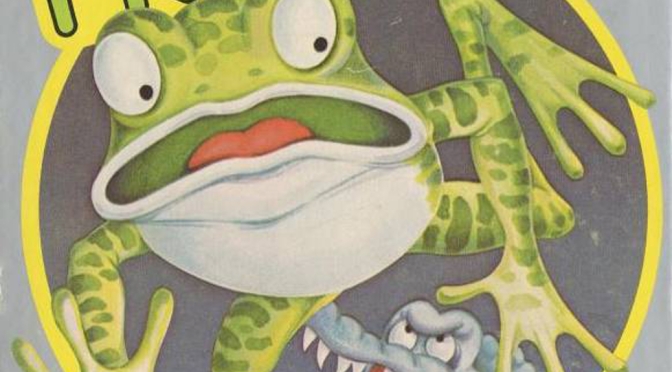 I’ve got the Atari 2600 hooked up and have been playing with it the past few nights. That’s when I got the idea for this fun little video. These four games were acquired at a garage sale or flea market and up until this recording, I had no idea what they were. So, watch me discover what these four unknown games are. Except for Frogger. That one’s on the house.

Time Clickers is an incremental game, a newish term for a genre that’s perhaps better known to host idle and clicker games, that is, games like Cookie Clicker, Progress Quest, and Candy Box. These games generally have no end objective and offer the player little avenue for input, but are wildly addictive. I’d like to think these games are best experienced passively with a routine check-in, but that hasn’t stopped me from spending elongated sessions with them or alt-tabbing to one of them every 30 seconds. The endless grind for improved effectiveness results in short-term satisfaction and long-term emptiness that usually sees me dropping off.

The basic, never-ending objective of Time Clickers is to destroy waves of assembled cubes. Doing so generates cubes to spend towards weapons, abilities, and upgrades. It starts off innocuously enough with a measly handgun but after a minute, the player has accumulated enough cubes to hire some additional weapons. Altogether, the player can eventually hire five other weapons that dropped out of Unreal Tournament, not to mention the ability to unlock idle mode for the handgun so they don’t have to actively destroy cubes themselves; a slew of abilities are also available for purchase. At this point, progress is based around increasing the DPS, thereby increasing the revenue intake. Each of the weapons can be endlessly upgraded and for the first run or two, that was my singular motivation.

The time aspect of the game comes into play in the form of Time Warps (as well as spending time “playing” the game, I suppose). After wave 100, a new type of cube begins appearing, one which can be spent on a variety of upgrades in the game’s skill trees. To spend these however, one needs to Time Warp back to wave 1. With each successive Time Warp, waves go by quicker, upgrades come faster, and Time Cubes, this new form of currency, are accumulated well, more rapidly. The “wall” one hits where enemies are too tough keeps extending into ever higher waves and progression somewhat resembles a roguelike in this way. This currency and these skill trees are now motivating me although I can still look forward to Weapon Cubes which begin appearing after wave 1,000. I haven’t gotten that far but the related unlockables don’t seem as clutch as the ones I’m dealing with now.

At this point, after about two weeks with the game, I don’t see a window for when I’ll be satisfied or done with it. I’d like to treat this game more as a timewaster, but I routinely find myself glued to it when there’s no time to waste. It’s a very addictive game and indicative of what so many of its contemporaries do so well: take a barebones approach to progression and ratchet up the feedback and reward loop. Time Clickers in particular is a prime example of this and with mobile and Steam versions that support a unified cloud-save system plus leaderboards it’s an easy sell for a free game. Shoot, the mobile version incentivized watching ads well enough that I did nearly every opportunity they came along! It’s inevitable that my focus will eventually turn away from Time Clickers, but for the time being I’ll keep alt-tabbing and wasting my lunch hour away with it.