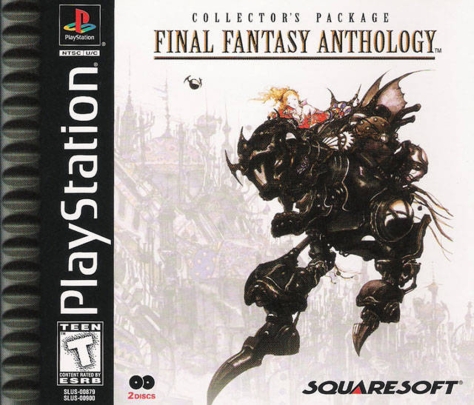 I don’t want this review to sound too acrimonious, but I had a lousy experience with Final Fantasy VI. It’s a game I started a couple of times over the past few years, only to burn out early on. By the time I began playing this game, soon after completing the two prior entries, I suffered from a Final Fantasy fatigue. With a few years between my last attempts, I finally restarted this summer and managed to beat it. While I enjoyed much of my playthrough this go-around, my impressions were still negatively colored by those initial burnouts, especially after listening to years of praise for this entry, often cited as the greatest in the series. Opinions are malleable, and mine will undoubtedly grow rosy with the passing of time, but as of this writing I feel this is the weakest Final Fantasy on the Super Nintendo. END_OF_DOCUMENT_TOKEN_TO_BE_REPLACED

Okay, Final Fantasy V hasn’t been released as much as its predecessor. In fact, the first time it was officially released outside of Japan was with the American release of Final Fantasy Anthology for the PlayStation. That was in late 1999 – basically seven years after it was originally released on the Super Famicom in late 1992. It took another two and a half years for the game to eventually be released in Europe. Since then, it has been released on the Game Boy Advance and on iOS and Android platforms.

As they did for the Super Famicom release of Final Fantasy IV, Square opted for a cutesy cover over the traditional usage of Yoshitaka Amano’s artwork. Again, he was relegated to the logo design. This cover hones in on the wanderer Bartz, and easily conveys this fact. The logo chosen for this game includes a dragon intertwined with the font. This is also apt as dragons play a significant role in the narrative.

The game was subsequently released on the PlayStation in 1996. This is my favorite cover that’s been used for one of the game’s releases. The cutesy character design again reigns supreme and this time it’s highlighting the many job classes. With the exception of two as there were twenty-two job classes in the original.

So this is the version of the game that I possess. I really dig the box art, but it pertains to Final Fantasy VI, so it’s not really comparable in this article. I will mention that I had difficulty  playing the disc on the PlayStation 3. There is a save screen glitch that the game freezes at. The glitch is still a factor when playing the disc on the PlayStation 2, but on that system, it’s only a graphical glitch. The menu can still be navigated and the game doesn’t freeze.

For the European release of Final Fantasy Anthology, this game received the honor of selling the game. If it’s successor was included in this package, I’m sure that wouldn’t have been the case. Still, this is prime Amano displaying the cast on one of the many ships.

For the Game Boy Advance release, a slew of extra content was added including extra job classes and an extra dungeon or two. I’d like to play these versions of the NES and SNES titles (excluding 3 which never saw an Advance release). The Japanese release included a lot of negative space, yet still left room for Amano’s character designs.

The cover used for the American and European releases however did away with that negative space and really zoomed in on the characters. Plus the large GBA banner on the left-hand side takes up much space.

Just as the case was with Broken Sword: The Shadow of the Templars, this game has been released on many digital platforms that don’t really have box art. As I mentioned above, I prefer the box art for the Japanese PlayStation release. It’s different enough from the rest to stand out, and the cutesy design works well when displaying the many job classes.

When I began playing Final Fantasy V, the first ten or so hours got me down. Coming off of my completion of Final Fantasy IV, this game felt like a pause in progression for Square. The characters, protagonists and antagonists alike, felt one-dimensional. The narrative didn’t allow for a rotating party as the previous game did, and this kept the experience stale. During this early period, the combat system felt wholly similar to its predecessor too. It wasn’t until the job system was unlocked and given a few hours to come into its own, that I really began to enjoy the game.

With a traditional narrative revolving around elemental crystals and a maniacal evildoer, I didn’t get drawn into the story. After all, with a name like X-Death, there’s no questioning his motives. The protagonists were, slightly, more fleshed out though. Bartz was a wanderer who encountered the princess Reina and a stranger from another planet, Galuf, while investigating a meteorite. They joined together and set about to protect the four crystals after they witnessed one of them shattering and learned that collectively, the crystals protected a seal on X-Death.

Soon enough, the group bumped into the pirate Faris. Get this, Faris suffers from amnesia and is actually Reina’s long lost sister, Salsa. The group initially fails to protect the four crystals and X-Death is freed. With his freedom, X-Death returns to his original planet to begin conquering those who sealed him away. As the story plays out, the group learns that the two worlds were once one and in their quest to defeat X-Death, they reunite them. Galuf’s granddaughter Krile joins the fray eventually as the party composition changes partway through the game.

This game adapts the Active Time Battle system of its predecessor so battles played out nearly identically. This meant time continued to flow as I navigated the battle menus, etc. The differentiator for this game was the job system. Although Final Fantasy III had a job system, the one implemented here is structured differently – I found it more fun.

Each character had a personal level and a job level. Gaining a personal level improved stats while gaining a job level unlocked related abilities. An unlocked ability could be equipped regardless of what job any given character was at the time. This meant a white mage could also use black and time magic or a samurai could heal in the clutch. The abilities and benefits were plentiful and I had many favorite combinations at different points in the game. This gameplay system kept the game interesting when the narrative failed to do so. In my mind, that’s how I’ll remember the game.

Final Fantasy V was a slow starter. It was hard for me to get excited about the game when the story and characters weren’t doing it for me. This was concerning as I felt Square genuinely moved the genre forward with Final Fantasy IV. Eventually, the gameplay became the focal point of interest for me as the job system grew more robust and my party was earning the experience to unlock abilities. Mixing and matching the traits of different jobs and overcoming tough enemies were definitely the stars of the game.

Surprised by how much I enjoyed the Streets of Rage games earlier this year, I look upon beat ‘em ups in a new light nowadays. However I have yet to play one in 3D, disregarding games which feature beat ‘em gameplay but rely on many more elements, like Batman: Arkham City. Therefore The Bouncer is my first foray into a 3D beat ‘em up with a traditional, simpler focus.

The Bouncer was released very early on in the PlayStation 2’s life cycle. It was developed collaboratively by Square and Dream Factory and published by Square Electronic Arts on March 5, 2001. With Square being more familiar with RPGs, I assume most of the game’s development was handled by Dream Factory, known for fighting games with minor RPG elements at the time. Regardless of the pedigree, The Bouncer is a beat ’em up.

The Bouncer follows a group of three bouncers as they rescue their kidnapped friend. Sion, Volt, and Kou are all working when Dominique, a young girl who Sion recently found, gets captured by ninja-like thugs. As they search for Dominique, they get involved with a major corporation run by a megalomaniac named Dauragon. He is the root cause for their woes and they deal with him and others as they get closer to finding Dominique and unraveling Dauragon’s plans.

It took less than two hours to complete The Bouncer and I liked the pacing of events. Unlike an RPG which may resolve a minor story thread over the span of hours, The Bouncer introduced a few key players early on and dealt with them over the short run time. I didn’t know a lot about the characters, but I didn’t need back story to understand them. Sion had strong feelings for Dominque and wanted to rescue her. Dauragon had a complicated past that shed light on his reasoning for kidnapping Dominque, but then the plot in general snowballed into craziness.

Whereas the older beat ‘em ups are primarily gameplay with little story development, The Bouncer is mostly story with minor gameplay bits. I haven’t tested it myself but some say that 2/3 of The Bouncer is cutscenes, and that sounds right and maybe for the best.

I didn’t like The Bouncer’s gameplay. Attacks felt like one-time affairs that could rarely evolve into a combo and never be chained with another attack. I had four attacks: low, medium, and high as well as a jump attack. I never mixed and matched attacks with any success and combos were short bursts of the same attack dependent upon how much pressure I applied to the attack button; The Bouncer took advantage of the PS2s unique pressure sensitivity feature. I found that I could lightly press the high three times and get a nice combo and I stuck with this.

Because attacks felt like one-time affairs, the combat felt stilted, very stop and go. The same can be said for the overall pacing of The Bouncer. I’d witness a few cutscenes and then get to play, only to defeat two enemies and watch more cutscenes. I found it jarring how little I spent actually playing the game. Most of the combat took place in closed off areas resembling arenas with only a few stages requiring me to get from point A to B. Some of the stages lasted less than a minute.

When I did get to play the game I had the option of choosing which bouncer I wanted to play as. They each had their own stats that could be upgraded. Implementing an element of RPGs, I gained experience from each enemy I took out. I could then apply the experience to level up Sion, Volt, or Kou’s health, power, or defense, or use the experience to learn a special attack. I stuck with Sion and focused on boosting his stats and it had a noticeable effect.

The Bouncer, my first foray into a traditional 3D beat ‘em up was lackluster. The gameplay was rough around the edges, what little of it there was. The addition of the experience system is actually a solid idea and tied with the game’s short length and multiple playable characters, it’s conducive to me playing more of the game. In retrospect, maybe I should’ve given more credence to the pedigree, because at the time Square seemed more interested in making movies, not beat ‘em ups.