In the aftermath of Double Fine’s outrageous success on Kickstarter, the service has received a lot of attention from smaller developers and the press. Since their achievement, other companies have turned to Kickstarter as a means of funding their projects and Wasteland 2 is the latest success story.

The original Wasteland was a post-apocalyptic role-playing game released for computers in 1988. Prior to reading about the similarly stupendous success of the Wasteland 2 Kickstarter, I had never even heard of the game. In the related marketing for Wasteland 2, Wasteland is billed as the original post-apocalyptic RPG, a precursor to the Fallout series of games. In fact, Wasteland served as an inspiration for Fallout.

It’s not necessarily the success of Wasteland 2’s Kickstarter that prompted me to write; although how Kickstarter, direct funding from consumers, and video games can interplay (catch the reference?) piques my interest, especially considering I’m studying business. No, instead it’s the following image. 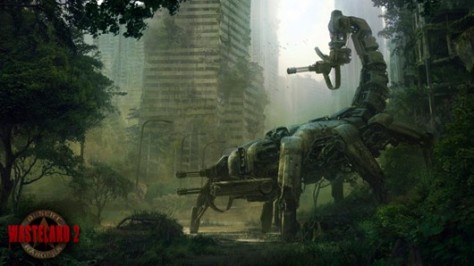 There are multiple things about this image that I find enthralling. I think the setting is the biggest facet of my adoration. The post-apocalypse is theoretically an ugly place, especially in the wake of an atomic holocaust if that’s the cause. What I see in this image though is the overgrowth of plants; being in a city setting makes it all the more unusual and appealing to me. When I begin to think about exploring this place, I can’t stop imagining what I’d find, and what the rest of this city, and world for that matter, are like.

The lush, plant-ridden settings is a key factor in why I love Final Fantasy XII so much, and a big reason why I’m enjoying my time with Xenoblade Chronicles. Those games featured very open environments inducing exploration, and I wonder if Wasteland 2 will be the same.

I really like the scorpion mech too. Styling it after a scorpion, gives it such a menacing look. I wouldn’t want to come upon it as an enemy, that’s for sure. It’s easy to go down a rabbit hole thinking of the scorpion mech’s construction and what mechs are like in this time, and really, what the world is like too.

A colorful, vibrant, but not overly so, setting is something that immediately turns me onto a game and it’s why I might try Wasteland 2 simply upon seeing this image. I just wish I had helped fund it now.