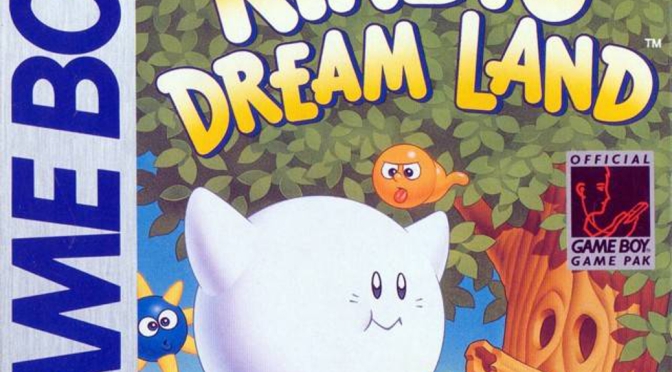 Released for the Game Boy in 1992, Kirby’s Dream Land marked the debut of the eponymous character that sucks and blows. What’s more, it also marked the beginning of Masahiro Sakurai’s entry into game development (in a directorial position, at least) and the growing relationship between the game’s developer – HAL Laboratory – and its publisher – Nintendo. But, instead of honing in on those aspects, I’m just going to talk briefly about the game itself. In short, it’s a basic platformer that was intended to be an entry-point for young video game players.

And short it is! After finding a complete copy at a local Goodwill for a couple dollars, I plugged it into my GBA SP late that night and wound up beating it there and then. After getting through the first two stages trouble-free, I looked online to see just how many stages were in the game. After reading there was five, I trucked on and completed the game, only having to continue once. After the credits, the game extolled a harder difficulty, but that’s not usually my scene.

One notable aspect of this game – while Kirby can suck up enemies, consuming them or shooting them back out, he doesn’t have his copy ability. This, being the ability to swallow an enemy and gain its attacks, wasn’t introduced until the next game, Kirby’s Adventure for the NES. Lacking this, the game felt a little empty taking my experiences with later Kirby games into account. Still, I was surprised to find that a few of the stages had a degree of openness to them, similar to the Genesis Sonic the Hedgehog games.

So, my biggest takeaway from Kirby’s Dream Land is its brevity. That’s not to say it’s a bad game, in fact, I think it’s very solid. Kirby controls great, and even lacking his copy ability, he still has many differentiating qualities. The boss fights that capped off each stage were fun too. And, I’d be remiss to not mention the jubilant soundtrack as well. It’s a high point for this game and indicative of the tunes the series would be known for. It’s a fun little game worth a half-hour of your time if you’re into platformers.