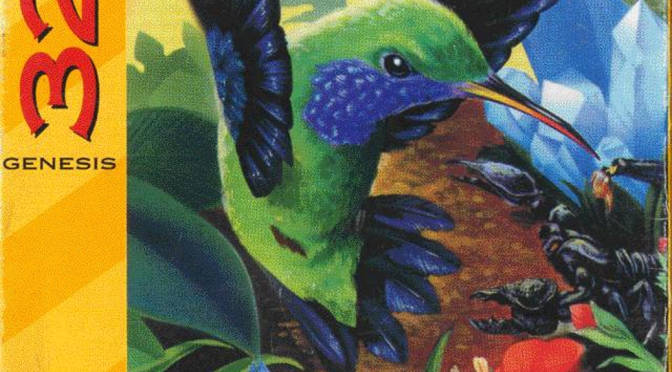 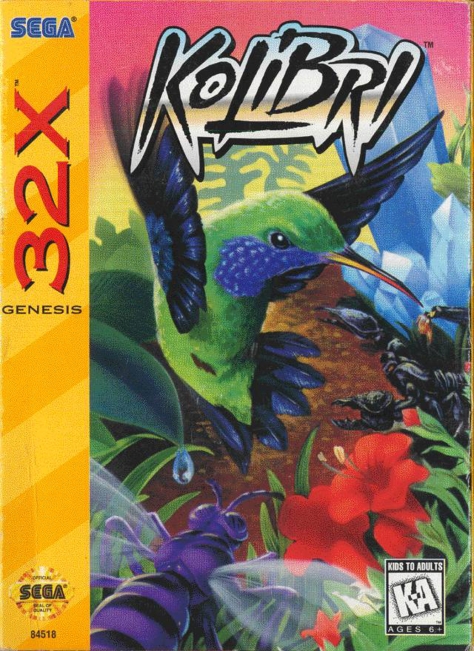 As a part of our week of vacation this year, Jenny and I drove to Galveston, TX and spent a few days on the beach. It was wonderful, especially for me as I haven’t been to the ocean in about a decade. On the way, we drove through Houston as I intended on stopping in at a few local game stores. This is a must when I travel some place new, and H-Town didn’t disappoint. One of the games I brought back home was Kolibri for the Sega 32X.

Kolibri is one of the Sega 32X’s few exclusives, and pragmatically, one of the few notable titles available for the add-on. It was developed by Novotrade International and published by Sega in 1995. Novotrade was the studio responsible for the Ecco the Dolphin games and I believe this game shares many of the same traits. However, I can’t extrapolate further as my exposure to that series has been limited thus far. Regardless, the studio had an apparent appreciation for ecology and that would appear to shine through in these creations of theirs.

Controlling the eponymous hummingbird, players are tasked with, drumroll…, saving the world! The manual has a rich backstory on the creation of Earth from a light crystal and the negative effects of a dark crystal crashing into the planet. The latter has had a corrupting effect on the nature and wildlife and Kolibri has been mystically chosen and infused with the ability to counteract the effects of the dark crystal and ultimately, destroy it. What this boils down to is a nontraditional shoot ‘em up.

The majority of the game’s stages take place in labyrinthine caves and ruins. Controlling Kolibri, I buzzed around looking for the exit and items that would assist in that endeavor, and did my best to destroy the infected insects trying to do the same to me. These stages were generally linear in nature, but featured so many paths that it didn’t seem that way in the moment. The final one was quite elaborate too, taking a good fifteen or twenty minutes to solve. Until the last third of the game, they lacked checkpoints which meant dying threw me back to the beginning, which usually wasn’t an issue due to their brevity.

The other types of stages that Novotrade incorporated were a more familiar sort: horizontally scrolling stages. Stages of this variety were infrequent (about every third stage) and easy to get through with the right weapon. Success, no matter what stage I was playing, was dictated by my weapon of choice. Like any good shmup, Kolibri featured a variety of upgradeable weapons. It took me a few stages before I began playing around with the assortment. Eventually I experienced each weapon fully upgraded and wound up with two or three stalwarts.

Due to my narrow-mindedness of the genre, I didn’t really think of Kolibri in terms of a shoot ‘em up for a while. Once I did, I began to perform better due to a newfound aggressiveness. The enemies often attacked as soon as they were on screen, and would usually respawn if “their location” went off screen and I returned. This aspect, and the stage design of the labyrinth stages, required a good bit of trial and error and memorization; particularly when I would start a level with low health, die, and then quickly restart a half-dozen times. It did grow frustrating (evidenced by segments of my let’s play) but the game didn’t prove to be too challenging and was relatively short.

Regarding the two notable Sega 32X exclusives I’ve played: Tempo and Kolibri, I’m more partial to the former. Like Tempo, Kolibri didn’t wow me from the start but it did grow on me. It curried favor with me mostly due to the uniqueness of its stage design and narrative. The manual is also spectacular, featuring a how-to on building a hummingbird feeder, references for extended learning, a flip note animation and much more. That being said the gameplay didn’t blow my socks off or have me begging for more. I thought Kolibri was awkward to control at times and the frequent restarting became disheartening. Nonetheless, it’s still an enjoyable game worth seeking out for owners of the Sega 32X.

As I did with my Tempo review, here’s one final shameless plug for my let’s play: