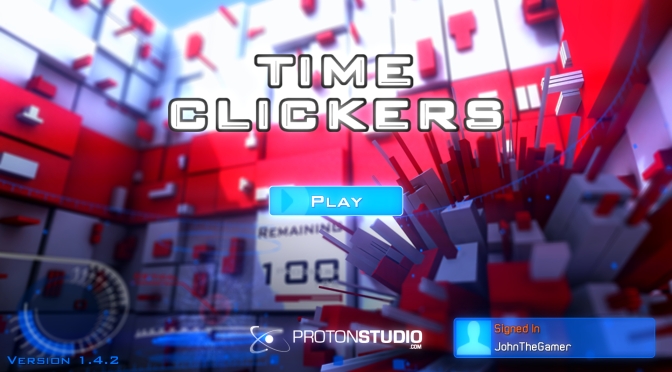 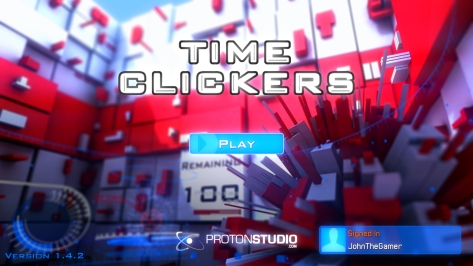 Time Clickers is an incremental game, a newish term for a genre that’s perhaps better known to host idle and clicker games, that is, games like Cookie Clicker, Progress Quest, and Candy Box. These games generally have no end objective and offer the player little avenue for input, but are wildly addictive. I’d like to think these games are best experienced passively with a routine check-in, but that hasn’t stopped me from spending elongated sessions with them or alt-tabbing to one of them every 30 seconds. The endless grind for improved effectiveness results in short-term satisfaction and long-term emptiness that usually sees me dropping off.

The basic, never-ending objective of Time Clickers is to destroy waves of assembled cubes. Doing so generates cubes to spend towards weapons, abilities, and upgrades. It starts off innocuously enough with a measly handgun but after a minute, the player has accumulated enough cubes to hire some additional weapons. Altogether, the player can eventually hire five other weapons that dropped out of Unreal Tournament, not to mention the ability to unlock idle mode for the handgun so they don’t have to actively destroy cubes themselves; a slew of abilities are also available for purchase. At this point, progress is based around increasing the DPS, thereby increasing the revenue intake. Each of the weapons can be endlessly upgraded and for the first run or two, that was my singular motivation.

The time aspect of the game comes into play in the form of Time Warps (as well as spending time “playing” the game, I suppose). After wave 100, a new type of cube begins appearing, one which can be spent on a variety of upgrades in the game’s skill trees. To spend these however, one needs to Time Warp back to wave 1. With each successive Time Warp, waves go by quicker, upgrades come faster, and Time Cubes, this new form of currency, are accumulated well, more rapidly. The “wall” one hits where enemies are too tough keeps extending into ever higher waves and progression somewhat resembles a roguelike in this way. This currency and these skill trees are now motivating me although I can still look forward to Weapon Cubes which begin appearing after wave 1,000. I haven’t gotten that far but the related unlockables don’t seem as clutch as the ones I’m dealing with now.

At this point, after about two weeks with the game, I don’t see a window for when I’ll be satisfied or done with it. I’d like to treat this game more as a timewaster, but I routinely find myself glued to it when there’s no time to waste. It’s a very addictive game and indicative of what so many of its contemporaries do so well: take a barebones approach to progression and ratchet up the feedback and reward loop. Time Clickers in particular is a prime example of this and with mobile and Steam versions that support a unified cloud-save system plus leaderboards it’s an easy sell for a free game. Shoot, the mobile version incentivized watching ads well enough that I did nearly every opportunity they came along! It’s inevitable that my focus will eventually turn away from Time Clickers, but for the time being I’ll keep alt-tabbing and wasting my lunch hour away with it.