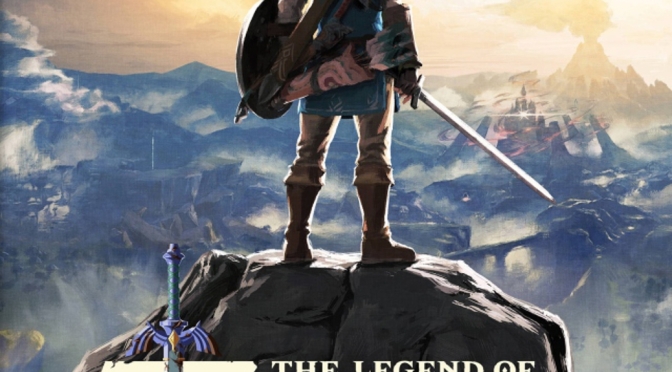 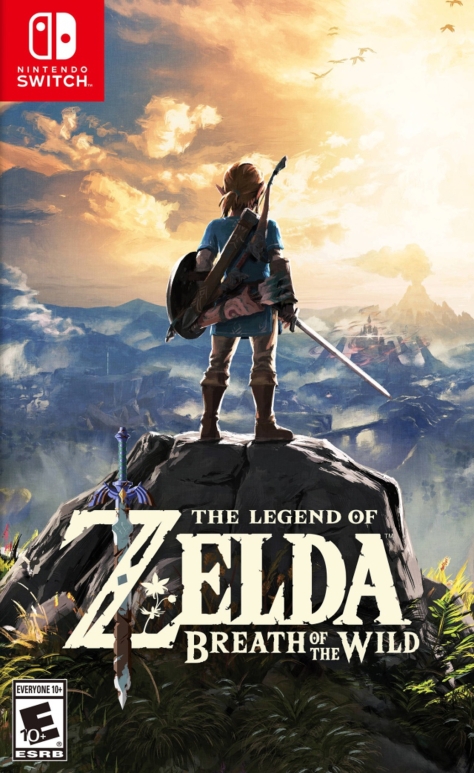 How cliché, yet how apt that The Legend of Zelda: Breath of the Wild is a breath of fresh air. The series remains one of the most prestigious in video games but after thirty years, has grown formulaic, stagnant even. Accordingly, it was no surprise when this entry underwent a traditionally extended development cycle before eventually releasing on two platforms (just like Twilight Princess on both counts). What is surprising is how with this entry Nintendo managed to remain true to the core tenants of the series, while bucking tradition in ways that resulted in a game that seems fresh, yet consistent.

At work were an array of gameplay systems and mechanics that coalesced perfectly, forming rewarding gameplay loops of exploration and experimentation. For me, this truly was a game where it wasn’t about the destination, it was about the journey. I’d begin every session with a specific goal in mind but like clockwork, wound up distracted by a million other fulfilling tasks. Hyrule was absolutely enormous but it was packed to the gills with worthwhile things to do.

The game began with Link waking from a hundred year slumber in an untouched cave. Suffering a bout of amnesia and aided by a disembodied voice, Link obtained a few items and exited to an impressive view of Hyrule and an understated title card. The key item Link obtained was the Sheikah Slate, a tablet-like device whose capabilities were quickly expanded over the next hour or two. Guided by a mysterious ghostly fellow, Link overcame puzzles in four succinct shrines centered on the core functions of the Sheikah Slate.

With these functions, Link could move metal objects, explode obstacles, freeze time on specific items, and create ice pillars from water. Combined with Link’s prowess for combat, every puzzle, dungeon, and shrine could be solved with the right application from the Sheikah Slate. This approach was in stark contrast to the traditional progression of the series and represented a wholesale change in game design philosophy.

Prior to this entry, most Zelda games were pseudo-linear experiences with story progression gated on completing dungeons and obtaining specific gizmos in a specific order. By the end of those games, I’d wind up with a dozen or so tools that were only used a handful of times, sometimes relegated only to certain dungeons. But to advance, I needed that tool in order to beat the boss or overcome an obstacle or whatever the roadblock was. In Breath of the Wild, the only progression gate was activating the functions of the Sheikah Slate. Less than two hours in and that was done. From that moment I could literally do anything; if I wanted, I could’ve gone straight to Calamity Ganon. It would’ve been a tough fight for many reasons, but I was free to create my own path within the constructs of the game as opposed to playing a part in a highly guided experience.

All that being said there were logical next steps. Filling out the map, for instance, was crucial and done in a manner similar to other modern-day open-world Ubisoft titles: by activating towers in the disparate regions of Hyrule. My first twenty hours were spent accomplishing this. Simultaneously, I was completing shrines, sidequests, and a myriad of other objectives while coming to grips with the combat and puzzle-solving mechanics. During this period I also reclaimed one of the four Divine Beasts.

Analogs for the dungeons of previous games, Divine Beasts were massive mechanical constructs that were utilized a hundred years prior in a failed attempt at sealing Ganon. Now tainted by Calamity Ganon, Link needed to enter, navigate their multi-chambered innards, and exorcise the evil influence. With control turned over to the Champions from a hundred years prior the Divine Beasts could once again be used to combat Calamity Ganon. More importantly, once freed of Ganon’s control, each of the Champions bestowed an ability that aided Link in combat and exploration.

As mentioned there were only four Divine Beasts, so essentially there were just four dungeons (discounting the final trek through Hyrule Castle). Compensating for this were the one hundred twenty shrines littered throughout Hyrule. These were dungeons of a smaller scale, usually focused around one or two gimmicks. Solving them was immensely satisfying since they utilized the Sheikah Slate’s functions in fun ways. Simply discovering some of them was a challenge as many were tied to sidequests. A significant portion were oriented around one on one fights against tough enemies, and these were generally unfulfilling. Nonetheless, each completed shrine rewarded Link with a Spirit Orb, an item that could increase his health or stamina when four were offered to a Goddess Statue.

Introduced in Skyward Sword, the stamina wheel dictated the length of time Link could perform strenuous activities. In this game, the primary drainers of stamina related to exploration, such as climbing or gliding. So important were these activities to me that I made it a priority to max out the stamina wheel as soon as possible, in favor of increasing Link’s health. This speaks to the emphasis, or at least my preference, for exploration. I yearned to find more “unturned stones” and knew being able to climb a little higher or glide a little farther was the means of success. A satisfying feedback loop emerged where I was able to discover more and get stronger, allowing me to discover even more and get even stronger, ad nauseam.

The ability to climb nearly everything and then glide from it, I mean… name a more iconic duo, I’ll wait. But seriously, this was game changing! It’s something I want to see in more open-world games going forward. It was all in service of exploration however and if Hyrule wasn’t jam-packed with fulfilling tasks, it wouldn’t matter how enjoyable it was. It was about the fifty hour mark by the time I reclaimed the Divine Beasts. It took me another fifty to reach a level of contentment to finally do battle with Calamity Ganon and finish the game. Regardless of the scope of the tasks I was undertaking in the meantime, from catching a measly bug to building an entire town, my time never felt wasted. Even when I intended to accomplish a specific goal and wound up sidetracked, I never felt dissatisfied.

My adoration for exploration and the importance of stamina is not to say that increasing Link’s health wasn’t important, or that combat wasn’t enjoyable; quite the opposite! In the hundred hours I played, I don’t believe I ever skipped a battle opportunity. Wandering Hyrule, groups of enemies were prevalent and varied compositionally. True to the open-ended game design, battles could be waged with near endless variety.  I’d often attempt to begin a fight stealthily but without a rock-throwing mechanic à la Far Cry, my rate of success was low early on. Once engaged, I utilized swords and other weapons such as spears, axes, bows and arrows, and the functions of the Sheikah Slate, depending on the situation and my foes.

Thanks to the dozens of weapons and related degradation system, my weapon of choice was constantly changing. The prospect of having to replace broken weapons used to be an immediate turn off. Coupled with their reported difficulty, it was one of the reasons I held off on the Fire Emblem series for so long. Perhaps as a result of personal maturation or merely changing tastes, this type of system is no longer a barrier for me (coincidentally the Fire Emblem games have grown on me). In this instance, it’s a concept that’s perfectly suited to the overarching design philosophy. It was somewhat bothersome while I was acclimating but the quantity and accessibility of weapons piqued my curiosity and coaxed me through.

Speaking of bothersome, inventory constraints never progressed beyond a manageable annoyance, at least in my case. Initially, the quantity of weapons and shields Link could carry was slight. His capacity could be increased by presenting Korok “seeds” to a lively Korok named Hestu. Hidden throughout Hyrule, they were bountiful (900 in all) and fun to locate. With my gameplay style orientated on exploration I had no trouble locating seeds. Instead, my problem was tracking down Hestu, or more accurately exploring a certain section of Hyrule.

After a few encounters and upgrades, Hestu relocated to the Korok Forest. I held off on visiting for far too long as this was also the location of the Master Sword. Knowing that I couldn’t retrieve it until a certain criteria was met, I refrained from even going to the Korok Forest until much later in the game. By proxy, I deprived myself of inventory upgrades until much later in the game. So, for about sixty hours I micromanaged the limited amount of weapons and shields I picked up. It wasn’t awful but it did highlight the need for some user interface improvements, such as the ability to swap an item after opening a treasure chest with a full inventory.

The UI and inventory management in general was clever, albeit definitely suited for the Wii U’s GamePad. Inventory menus were divided up so I could quickly scan through categories such as melee weapons, bows and arrows, or cooking ingredients or navigate within the categories themselves. These menus were obviously designed for the Wii U GamePad’s touch screen but were manageable on the Switch, if not a little cumbersome. Additionally, switching between weapons, shields, and Sheikah Slate functions was made easy by d-pad hotkeys. By pressing a direction on the d-pad, the game would pause, a small graphic menu popped up, and I could quickly equip something by scrolling over it with the right analog stick.

Cooking ingredients, meals, and potions represented the bulk of items Link carried but these were absolutely necessary. Beyond meals that restored health or stamina, meals could affect Link’s body temperature, allowing him to explore hot or cold regions, increase strength, speed, and much more. Before I located clothing suitable for cold weather, I relied upon hot dishes to explore snowy mountainous areas. Crafting meals and potions was done by combining ingredients and tossing onto a fire. I enjoyed experimenting with ingredients and discovering new outcomes although I eventually settled into some favorites, especially ones that extended Link’s health.

If it’s not obvious at this point, the narrative didn’t wow me like the gameplay systems did. It was serviceable; very traditional unlike so much else about the game. One saving grace was the exuberant cadre of characters and their chatty dialogue. Honestly though, the overarching good vs. evil storyline paled in comparison to the stories I could tell from each session. When Skyrim released, I recall unloading trucks with a half-dozen coworkers and every morning was filled with the quests and serendipitous encounters we’d all had. This game provided the same quantity and quality of those moments, easily spawning a month’s worth of “water cooler” conversations; it turns players into storytellers. Heck, my Twitter was swamped with Breath of the Wild for the entire month of March. Well, that and political talk…

With all Divine Beasts reclaimed, Link’s memories regained, and all 120 shrines completed, I finally made the trek through Hyrule Castle and defeated Calamity Ganon. It’s been a month or two now and I haven’t played the game since. After a hundred hours, I was fulfilled and beginning to long for something else. Breath of the Wild incorporated many distinct gameplay systems, but did so with a remarkable level of coherency and polish and the result was engaging and addicting. I’m still amazed that conservative Nintendo was able to craft such a refreshing entry in the Zelda series! With additional content now releasing, and a host of sidequests remaining, it’s about time for me to dive back in.

5 thoughts on “The Legend of Zelda: Breath of the Wild [Switch] – Review”