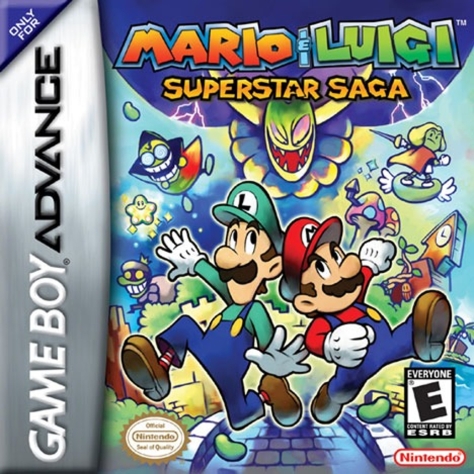 Considering Mario & Luigi: Superstar Saga + Bowser’s Minions released on the Nintendo 3DS just two weeks ago, this review is coming at a pretty opportune time. Granted, I played through the original Game Boy Advance version and not the remake… but what I have to say should remain applicable. And, for the record, I purchased my copy before the 3DS remake was announced, like a week or two before actually. Needless to say the remake announcement surprised me and my uncle who works at Nintendo…  Anyways, developed by AlphaDream and published by Nintendo, Superstar Saga was released for the Game Boy Advance in November 2003. A spiritual successor of sorts to Super Mario RPG and Paper Mario, it similarly blended humor, platforming, and role-playing gameplay with great execution.

When Peach’s voice was stolen by the witch Cackletta, a chase to the Beanbean Kingdom ensued with Mario and Luigi courting an unlikely ally: Bowser. Understandably their partnership was short-lived. Nonetheless, as the brothers traversed the Beanbean Kingdom they found its citizens were happy to help, especially after they realized who the brothers were. In conversation, almost no one recognized the brothers until they jumped. Then, the light would go off and they’d be like “ah yes, Mario… and the green one.” Luigi frequently served as the punch line but truthfully, practically every other line in this game made me chuckle. Then there’s Fawful, Cackletta’s sidekick and one of the funniest characters in any video game. His non-sequitur filled diatribes and penchant for peculiar language set him apart from the cast of amusing characters and elicited a smile from me whenever he was on screen.

Exploration and progression revolved around the brothers’ continually expanding arsenal of teamwork-oriented abilities. Outside of combat, I controlled both brothers simultaneously and was able to independently cycle through their abilities via the shoulder buttons. Besides their normal function in initiating combat, such as striking an enemy with a hammer, they had secondary functions used to gate progression, such as striking one another for a shrink effect, granting entry to otherwise inaccessible spaces. Platforming played a major role as well and I was impressed by the implementation. It didn’t feel shoe-horned in, firstly because this is a Mario game but also due to the teamwork-oriented abilities. The brothers’ unique jumping abilities were used in a variety of ways to overcome the myriad platforming obstacles. Some of the more challenging sections had them solving dungeon puzzles while separated, limiting their ability use and forcing me to think differently.

True to its spiritual predecessors, the turn-based combat included timing bonuses that made for engaging battles. Every offensive and defensive action could be bolstered by a well-timed button press, the specifics of which varied based on the enemy or attack. It was slightly intimidating fighting new enemies as I’d have to learn new timing and weaknesses, but this also kept battles exciting to the very end. The brothers leveled up and acquired gear at a rate that led to a smooth difficulty curve. With the exception of avoiding weaker enemies while backtracking, I fought every enemy and didn’t feel like I needed to grind levels to overcome a tough boss. Generally, any tough fights I encountered spawned from my lack of special attack use, something I didn’t rectify until very late in the game. I had perceived them being more difficult to execute than they truly were.

My journey with the brothers in Beanbean Kingdom concluded within twenty-three hours, a relatively brief runtime for an RPG. It was a succinct, well-paced adventure full of laughs and enjoyable gameplay, however. Superstar Saga was a fantastic follow-up to its spiritual predecessors and has deservingly spawned direct sequels of its own. The comedic tenor emanating from the narrative and cast of characters was beguiling, to say the least. If it hadn’t captivated me at the outset, the varied platforming gameplay and engaging battle system would’ve done me in within the first hour or two. As it stands, I highly recommend this game and I’m sure the same can be said for the remake, despite the absence of Geno.