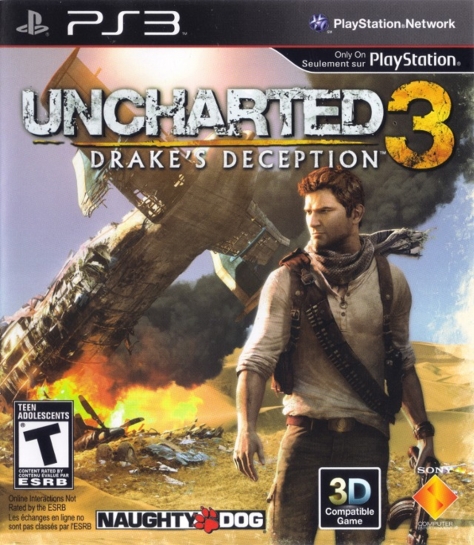 Spurred on by my recent purchase of Uncharted 4: A Thief’s End, I’ve returned to the series after a yearlong hiatus. Picking up where I left off, I’ve now completed Uncharted 3: Drake’s Deception, the final installment on the PlayStation 3. Debuting in North America on November 1, 2011, Naughty Dog attempted to top its predecessor, which I deemed a “greatest hits of the action-adventure genre.” In many ways, this entry does. The set piece events and ancient mechanical puzzles were more frequent and extravagant than ever before. Nate and company explored a variety of new, visually impressive and incredibly detailed environments. Gameplay was enhanced by an increased emphasis on melee and improvements to stealth takedowns. And, per usual the acting and storytelling was top notch. All that said, the multitude of “one-shot” cliff-hanger moments and the dependable presence of a perfectly placed ledge was wearing thin and eroding the veneer of realism.

The game opened on a rainy London night, with Nate and Sully entering a shady backstreet pub and proceeding upstairs for a deal. The deal, a briefcase of money in exchange for Nate’s treasured ring, the one originally belonging to Sir Francis Drake segued into a barroom brawl when Nate realized the bills were counterfeit. This fight acted as an introduction to the revamped melee system and foreshadowed the game’s increased emphasis on fisticuffs. No doubt inspired by the counter-heavy combat system of Batman: Arkham Asylum, Nate addressed foes with his fists more frequently than in previous entries. The implementation was a little imprecise and when the opportunity presented itself, I preferred the gunplay. But, Nate and his foes were magnetized to each other in a way that made escaping fist fights frustratingly difficult. Once they put a hurting on a half-dozen goons, they escaped to the back alley. There, they were reacquainted with Katherine Marlowe, a nefarious figure from their past and her right-hand man and the one from the botched deal, Talbot. They exchanged unfriendly pleasantries before she retrieved the ring and ordered them shot.

A flashback ensued, showcasing how Nate obtained the ring as a youth, meeting Sully and Marlowe in the process. Despite just starting the game and having not played an entry for more than a year, this focus on backstory amid minimal bombastic confrontation was unexpected and refreshing. When it concluded, Nate and Sully awoke in the alley revealing bullet-proof vests and an ally in Charlie Cutter, the Jason Statham-looking thug Marlowe ordered to assassinate them. Apparently, everything had gone according to plan and Marlowe snatched a forged ring. They rendezvoused with returning collaborator Chloe Frazer, who witnessed the garage Marlowe and her men entered. Nate climbed around the building and infiltrated from the rear only to find the building was empty. After granting entry to the rest, the group discovered a secret passageway burrowing into the city’s service tunnels. Nate, Sully, and Cutter descended into London’s underground while Chloe remained on the surface.

Their pursuit continued as the modern services tunnels gave way to Victorian era subway tracks. Dead ends and obstacles forced Nate to find creative solutions to proceed utilizing his platforming expertise. Following a couple brief encounters with Marlowe’s henchmen, the subway tracks gave way to another makeshift tunnel and, catching them off guard, Tudor era architecture. Overlooking a library brimming with artifacts, the trio witnessed Marlowe and Talbot fumbling with the fake ring and an astrolabe-like decoder. Realizing they’d been had and likely trailed, they backtracked and began searching for Nate and company, who then descended into the library and successfully utilized the decoder. Their period of discovery was cut short by returning patrolmen who alerted others to their presence. Before reaching Chloe’s getaway van, they were forced to engage Marlowe’s men in many large-scale shootouts. The third-person, cover-based gunfights were as familiar as ever.

Safe in their hideout, they discussed what Nate was onto. He believed they were on track to discover a secret trip of Sir Francis Drake’s, one that found the “Atlantis of the Sands” for Queen Elizabeth I. His excitement couldn’t be subdued by Chloe and Cutter’s hesitance regarding an unsure payoff and the serious threat posed by who they were dealing with, a recurring theme throughout the game’s ten hour runtime. For better or worse, Nate always got his way. Following leads, Nate and Sully traveled to a remote French chateau built around a Crusader castle while Chloe and Cutter explored a related castle in Syria. The chateau in France had been abandoned for decades and was terribly dilapidated, again forcing Nate to clamber about to forge a path. They eventually found themselves in an underground sepulcher, reminiscent of the draugr filled tombs of Skyrim. There, they retrieved an important amulet. Unfortunately, Talbot was present as well. He stole the amulet before having his henchmen set fire to the chateau.

Nate and Sully’s bombastic escape from the crumbing inferno was the first of many major set piece events in the game, and like those that followed I found it hard to buy-in to the seriousness of the situations Nate was involved in. There’s always been a ledge to hang from or “one-shot” jumps to safety with the series, but that convenience this go-around was especially egregious considering the frequency of these events. That said, it was hard not to get caught up in the excitement of the most grandiose spectacle of the game. Late in the adventure, aboard a supply plane over the Rub ‘al Khali desert, a series of unfortunate events led to Nate dangling outside the plane before unwittingly causing it to disintegrate, midair. Naturally, he somehow survived. Because any actual threat felt toothless, this event and many others turned into Fast & Furious style blockbuster action sequences that had me laughing due to their absurdity and million-to-one odds of survival.

After escaping the chateau, the duo boogied to Syria and reunited with Chloe and Cutter, where they found a second amulet that pointed them to Yemen. They were right to reunite as Marlowe and Talbot had brought a small army to Syria. As I mentioned before, the cover-based gunplay was familiar and with an impressive variety of weapons to use, I was able to slide right into old habits. Nate always faced overwhelming odds when engaging enemies in shootouts but in spite of the fact I was playing on the normal difficulty, I seemed to die more often than in previous entries. This was somewhat annoying but forced me to better address foes by flanking them, sneaking up on them, etc. Surviving another climactic escape, Chloe and Cutter stayed behind while Nate and Sully enlisted the aid of Elena in Yemen. As was becoming routine, their relationship appeared to be on hiatus, although they obviously cared for one another. The fractures of their relationship were touched upon in conversations about Nate’s zeal for adventure, regardless of the risk it brought to others, namely an aging Sully.

One thing lead to another and their sojourn through the stunningly detailed and lively Yemeni marketplace took them exactly where they needed to be. Underneath the city in a dry cistern, the trio solved a few ancient mechanical puzzles. They weren’t the first I’d come across but these in particular highlighted the awe-inspiring nature of locating and solving untouched puzzles left by a previous civilization. Back on the surface, Nate was struck with a poison dart and ran through the marketplace amidst a trippy drug sequence. Waking up having been captured by Marlowe and Talbot, he was then transferred to the custody of Rameses, a Yemeni pirate, when they had no further use of him. Once more awaking in someone else’s care, Nate found himself in a ship graveyard, an ugly setting but one intricately crafted by the talented team at Naughty Dog.

Believing Sully was being held hostage, Nate scrambled through the densely packed ship graveyard, taking out dozens of well-equipped pirates to rescue him. Realizing this was one of the best places to farm the weapon trophies, I returned here when the game was complete. As with the previous entries, the trophies weren’t especially creative, but I found myself alternating weapons and play styles in service of unlocking them, which kept gameplay fresh. Similarly, I thoroughly explored environments searching for the 101 hidden artifacts, finding three quarters of them before resorting to a guide. On the other side of the scrapheap Nate located Rameses’ cruise ship. A storm was raging and the sea was choppy by the time Nate boarded it, foreshadowing the climactic events that followed.

Back in Yemen and still without Sully, Nate and Elena followed through with a plan to penetrate Marlowe’s convoy via a supply plane. After the plane disintegrated, Nate wandered the Rub ‘al Khali desert for days, hallucinating off and on, before miraculously stumbling upon a deserted village and Marlowe’s men. Gaining a second wind of energy, he was able to outlast dozens more foes before being rescued by and enlisting the help of Salim, a sheikh of the local Bedouin tribe. After briefing Nate on the history behind Ubar, the duo rescue Sully from the convoy and travel further into the desert, eventually reaching their destination.

The city exists and is more fantastical than Nate and Sully imagined. Now knowing why Francis Drake covered up this discovery and what Marlowe truly desires, they descend further underground, navigating the surreal architecture, confronting more henchmen, and surviving another trippy sequence, that left me questioning Sully. Ultimately, they succeed in stopping Marlowe and Talbot, unintentionally destroying the city in the process. Like the set piece events leading up to this conclusion, the impressive, edge-of-your-seat escape from the crumbling city was somewhat undercut by the absence of failure. While their adventure wound up being void of treasure, Nate recovered something more important, a mended relationship with Elena. Sully on the other hand managed to sneak a few artifacts valuable enough to purchase a new seaplane, both developments righting their futures, just like old times.

Although the dependability of ledges and increased frequency of “one-shot” moments was wearing thin by this entry, Uncharted 3: Drake’s Deception remains a masterpiece of the action-adventure genre. The globe-trekking adventure Nate and company went on was remarkable, as were the outlandish situations they found themselves in. The characters were portrayed with an adeptness and familiarity rivaled only by other entries in the series. As always, Naughty Dog outdid themselves technically, creating strikingly detailed and visually impressive settings to explore. I wasn’t partial to the newly implemented melee system but appreciated the increased diversity in ways to competently address enemies, beyond the well executed cover-based shooting. In the end however, I think I still prefer its predecessor. This entry is undoubtedly more impressive, cranking everything to 11 like a summer movie blockbuster, but with a diminishing sense of believability, I found it harder to buy-in to the continuing adventures of Nathan Drake.