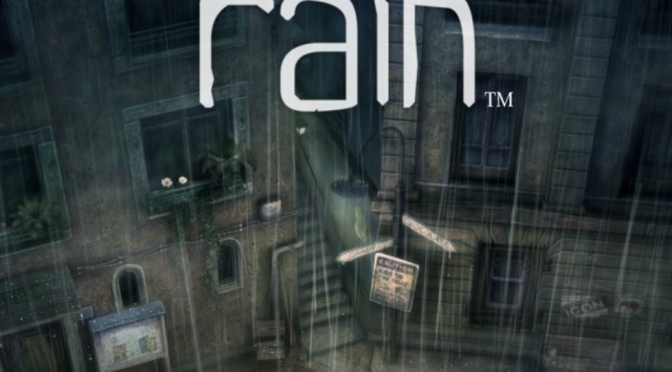 Spearheaded by Sony’s Japan Studio and developed by Acquire, Rain is a somber adventure game available for the PlayStation 3. Released worldwide at the beginning of October 2013, Rain’s debut was no doubt overshadowed by the impending launch of the PlayStation 4. In fact, looking back on how I came to own the game, I didn’t even buy it; I received it through the settlement for the 2011 PlayStation Network outage. Unlike my ownership of the game, my decision to give it a go was intentional. Wanting to play through a batch of shorter games in the wake of Fire Emblem: Three Houses, and thinking it might tie into the Halloween season, it topped the short list of games I had put together.

Played briefly each night over the course of a week, Rain only took me three hours to complete, and another two to find all of its collectibles. Navigating a young boy through the abandoned city streets of what appeared to be Paris post-WWII, I was trying to catch up to a girl he saw from his bedroom window. She was being chased by an unknown, monstrous figure, a creature they had little recourse against other than to run away. The children weren’t themselves, however. In the dreamlike world they found themselves, they were silhouettes. Only the rain, which perpetually fell, gave them form. This concept informed the limited gameplay, which effectively placed the game in the walking simulator or environmental narrative, branch of adventure games.

The boy’s path was a linear one. He was a step behind the girl for much of the game, and almost always just a half-step ahead of the Unknown. When the Unknown, or one of the other half-dozen creature types saw them, they’d mercilessly pursue until the children were no more, be it their death or safety from the rain. In their current state the children, and the creatures, mind you, would become invisible if they found sanctuary from the rain. In addition to escaping foes in such a way, the children often distracted creatures to get by them. Splashing in puddles and triggering conveniently placed phonographs allowed them to move forward undeterred. Overcoming obstacles in such a way constituted the remainder of the gameplay; not necessarily puzzles, just interactions.

Broken up into eight chapters, bookended by sparse watercolor drawings with lightly animated flourishes, Rain’s story unfurled through text blurbs strewn about the boy’s passing environment. On the surface it was a tale of searching and perseverance, and perhaps that’s all it needs to be about. But the fairytale elements like the creatures, shadowy children, and significance of darkness and light lend themselves to interpretation. Metaphors, all, for sickness perhaps; or maybe the setting was meant to evoke the war, and not just provide a backdrop of unique buildings. Whatever the case may be, the city’s nighttime ambience and the occasional frightful chase were enhanced by the minimal score. Compositions featuring the piano, accordion, and other wind and stringed instruments came in and out of focus depending on the situation, like the determined “Raindrops, Footsteps” or the eerie “Presence”.

I liked Rain, although I never developed a strong connection to the game. Most of this can be attributed to its shallowness. The simple, linear gameplay didn’t provide enough binding for me to grow attached to the children or the peril they faced. As the chase scenes became frequent and the reality of the limited obstacles set in, my brain was allowed to turn off. The bit-by-bit narrative blurbs kept me informed, telling the children’s story, but with little zest. The audio/visual elements were appealing; like a guiding light in the game’s nighttime city, they were a rare bright spot. All things considered, Rain was a monotone experience requiring little mental elasticity; just keep pressing forward. It was a lovely game, but I’m happy with what I paid for it.

One thought on “Rain [PlayStation 3] – Review”