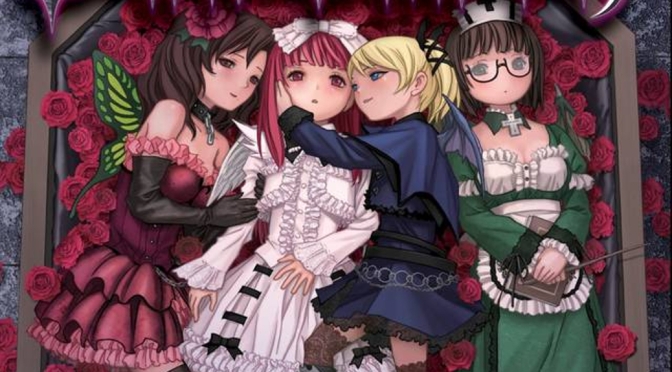 Stylistically, I’m not as smitten with Deathsmiles as I am with Akai Katana. What can I say, I’m just not into sexualized preteens and teenage girls! Honestly though, across the dozen or so unique half-hour playthroughs, there were only one or two skeezy scenes, but hey, one is too many, right?

Outside of the character designs of the protagonists, the adherence to and quality of the spooky theme was top notch. There were some frightfully creative boss designs, some of the most memorable I’ve seen in a shoot ‘em up, in fact.

Of particular note was the giant head of a man, staked to the ground with lips sewn together, writhing around as I launched thousands of bullets at him. And Tyrannosatan, never will I forget something as absurd a concept as TYRANNO-freaking-SATAN! This outlandish skeletal demon dinosaur had many forms, but none could withstand these Lolitas.

Like Akai Katana, Deathsmiles is a horizontally scrolling bullet hell shoot ‘em up, whose difficulty lies not in completion, as unlimited continues nullify that challenge, but in attaining a high score. Maximizing one’s score required a firm understanding of each character’s bullet and option patterns, the handful of firing modes (tapping the A button vs holding the A button, for instance), and where enemies spawned in the levels themselves.

Not wanting to devote the time necessary to “git gud” I was satisfied as a tourist, playing the game ad nauseam with each of the characters, twice, to witness their multiple endings, and across the three versions of the game included. I must’ve “beaten” this game close to twenty times. It was nice to compare and contrast each character’s unique attack, but let’s be real; these playthroughs were in service of unlocking achievements. The average player would be satisfied after a couple playthroughs, and an ending compilation on YouTube might satiate those a little more curious.

A playthrough consisted of shooting my way through about eight automatically scrolling stages. Progression was different from a lot of shmups in that I had some agency in choosing the order of stages, as well as the difficulty of each. Naturally, ramping up the difficulty made for a more challenging, but more rewarding, experience. I dabbled with some of the tougher difficulties, attempting to better my understanding of the game’s scoring mechanics.

These scoring mechanics varied depending on which version of Deathsmiles I was playing, but generally they revolved around collecting items dropped by fallen enemies, and activating a powered up mode for my character and her familiar. Not to sound too much like the “I’m getting strong Boss Baby vibes here” meme, but this is not too dissimilar from Akai Katana.

Unlike that game, I frequently had to pivot my attacks, firing forwards and backwards as enemies rushed in from both sides. The two firing directions were assigned to a face button, while pressing both simultaneously would activate a targeting area, wherein my character’s familiar would automatically attack anything that entered. Further, I could orient the familiar around my character when I wasn’t firing.

Positioning the familiar, registering enemy positions to line up my attacks, and occasionally trying for high scores, it was a lot to process in later stages and on higher difficulties, but it did grow to become a series of unthinking actions. Still, I never felt the desire to put forth much effort mastering these mechanics. Despite the uncommon spooky setting and the stellar dedication to it, I just couldn’t get over the Lolita trappings.