When Peggle: Dual Shot failed to fill the role of my next “bedtime” game – a logic-orientated puzzle game, preferably – I went in an entirely different direction. I’d been longing to play some of the classics from the Nintendo DS library that I’d missed, and compiled a shortlist that contained the debut entries in the Phoenix Wright, Etrian Odyssey, and Trauma Center series. The unique qualities and positive reputation of each had drawn me to them for years – and I still plan on playing the “runners up” at… some point – but I ultimately went with the latter of the trio, if anything for its comparable brevity.

END_OF_DOCUMENT_TOKEN_TO_BE_REPLACED 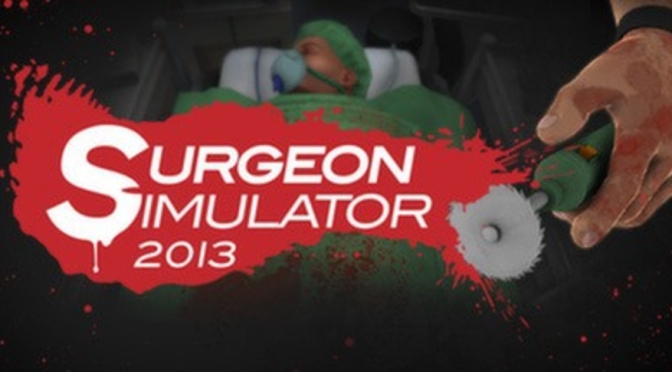 This is an article about Surgeon Simulator 2013. Here’s the deal though, I haven’t actually played it… yet. I’ll get around to it someday – trust me. I, no doubt, acquired it as a part of some Humble Bundle, and honestly didn’t think too much of it until now. I hadn’t heard of it prior to my acquisition and summarily forgot about it afterwards. Having just watched a few videos of the game on Steam though, I’m surprised! It’s not a serious take on surgery, but instead, a “darkly humorous” take on the practice. It appears to have a control scheme similar to Octodad, the goals of Trauma Center, and the parameters of Operation. It looks comical and it’s on my radar now.

Surgeon Simulator 2013 is actually the follow-up to a prototype of sorts that was developed in 48 hours, presumably during a game jam. This title was developed with a little more time – 48 days. The individuals responsible were Tom Jackson, Jack Good, Luke Williams, and James Broadley; otherwise known as Bossa Studios. This game was originally released for PC and Mac on April 19, 2013, and has since seen releases on PlayStation 4, iOS, and Android.