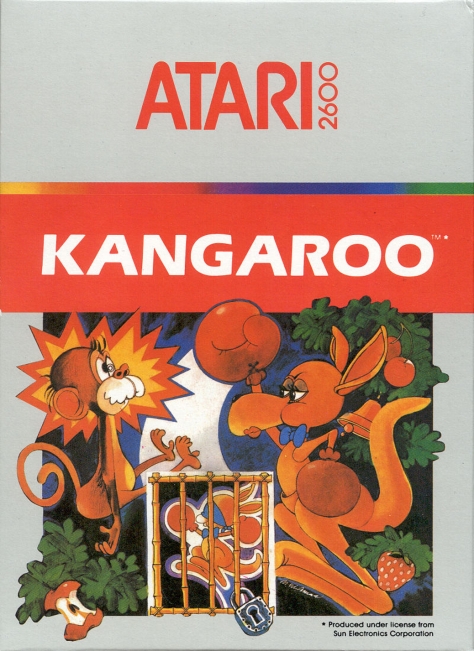 After completing Ys: The Vanished Omens, I decided to pause my Sega Master System playthroughs and turn my attention to a couple of recently acquired Atari 2600 games. Kangaroo was the first on my list. Published by Atari in 1983, it’s a port of the Sun Electronics (Sunsoft) arcade game released the year before, itself a derivative of Nintendo’s Donkey Kong. Playing as a mother kangaroo, I had to scale three distinct stages to rescue her captive joey. Along the way, I dealt with an endless barrel of apple throwing monkeys by boxing them into submission or avoiding them altogether.

Unlike the original arcade release which contained four stages, this version only had three. The first stage was a cinch. There were a few ladders to climb, some fruit to collect for bonus points, and ample space to learn the patterns of the monkeys. On the other hand, the second stage increased the difficulty significantly. Ascending this stage was done by jumping onto ever higher platforms, all the while avoiding the monkeys and their apples, and maybe collecting a fruit or two, so… mostly the same as the first stage. It wasn’t terribly difficult to manage the onslaught of monkeys but trying to do so while also nailing the half-dozen or so jumps grew to be a maddening experience.

What made it such a maddening experience was the precision required to make the jumps, and the lack of precision the Atari 2600 joystick offered. To successfully execute a jump, I’d have to wait until the absolute last second to leap from a lower platform. If I triggered the jump a split-second too soon, the mother kangaroo would miss the higher platform and plummet to her death. If I triggered the jump a split-second too late, she would walk right off as if the game didn’t recognize my command, which it may not have.

The jump function was assigned to the up position of the joystick, meaning a jump with forward momentum needed the joystick to be in the top left or right box of its range. On the second stage, it was necessary to execute a half-dozen or so forward jumps, which was nigh impossible for me to perform under pressure. Thinking it was faulty equipment, I played with three separate controllers but each resulted in the same outcome: inconsistent forward jumps. Despite the small sample size, I ruled out the hardware angle and blamed my struggles on the pinpoint accuracy needed to effectively platform. Essentially, the window of opportunity to execute a successful jump was microscopic. Regardless of the cause, the constant failure had a definite effect on my mood.

The couple of hours I spent playing Kangaroo were divvied up into smaller sessions, each lasting about twenty minutes. It was about then that I’d reach my breaking point and rage quit. I’d sit there fuming, contemplating the purchase of a punching bag or the adoption of meditation. SERENITY NOW! Nonetheless, I kept coming back. My desire to see the third and final stage was strong but truthfully, and in spite of the exasperating platforming, I did glean enjoyment from the game. Other aspects of the gameplay were responsive and fun, and bearing in mind the era and the platform, the game was respectable from an audio/visual standpoint. I eventually reached the final stage and survived long enough to see it momentarily, accomplishing what I intended. Looking back, I’m fairly confident it wasn’t worth the time or stress involved, but here I am.