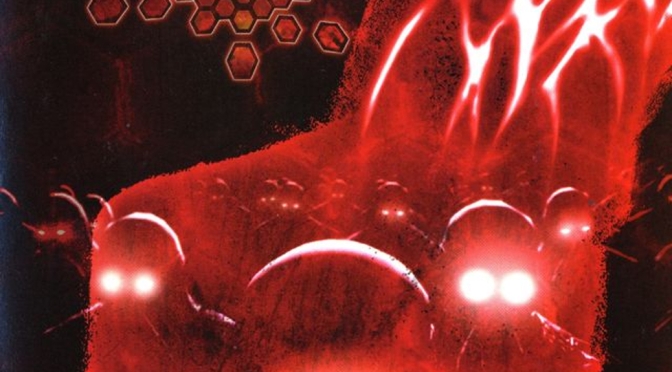 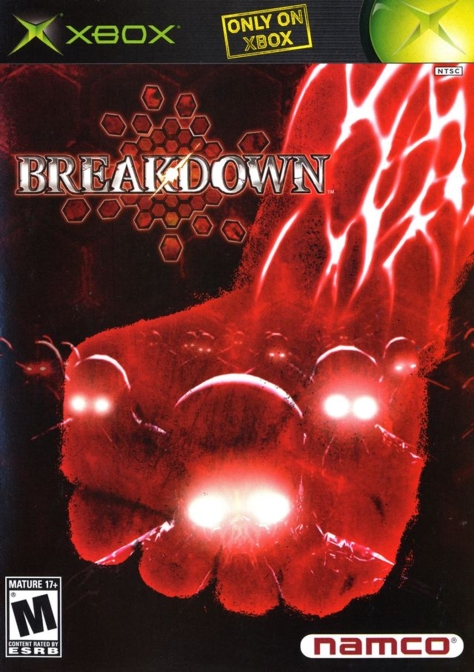 Towards the end of Breakdown, after a protracted fist fight against Solus, the game’s shirtless Sephiroth stand-in and resident antagonist, my amnesiac avatar Derrick Cole lie battered on the floor. Unable to save Earth from encroaching T’lan warriors, Derrick bore witness to humanity’s last best hope: a nuclear bomb to the heart of Site Zero, the very spot he rested. Twenty years later he woke up in someone else’s body, his memories having been transferred. The T’lan have overrun earth but he’s been given another shot. I, too, suffered a bout of amnesia with Breakdown. I played it years ago just up to completion and have always recalled it fondly. My memories failed me.

Developed and published by Namco, Breakdown first released in Japan before coming stateside a few months later on March 16, 2004. It’s somewhat unique in the fact that it’s an Xbox exclusive of Japanese origin, a rare combo before Microsoft’s concerted efforts of courting Asian developers early in the Xbox 360’s life cycle. Almost assuredly designed with Halo-addicted western markets in mind, it’s played solely from the first-person perspective. While it does feature first-person shooting, it’s truly more of a first-person brawler. The combination of gameplay and perspective was intriguing conceptually but hit or miss in practice. Unfortunately, I felt the same about the narrative, design, and just about everything else.

“Hope is a waking dream.” That well-known quote became a familiar motif throughout Breakdown, first seen in its entertaining attract mode: an action-packed movie trailer preview, complete with MPAA-styled green screen. The influence of The Matrix was apparent in this trailer although the gameplay failed to match the theatrics on display. Since T’lan enemies were impervious to most human weapons, firearms took on a backseat role; instead, I defeated these foes in measured fist fights. There was a heavy emphasis on blocking, biding my time waiting for an opening, not unlike in a boxing game. When a foe was vulnerable, I could unleash a variety of simple punch/kick combos. Hits landed with impactful thuds and in general, I thought the brawling gameplay was satisfying. Fighting against multiple T’lan wasn’t, however.

When engaging in fist fights, Derrick locked-on to a single target, directing all actions towards that foe. If multiple enemies surrounded him, I was done for; they’d easily pummel me to death. The best way I found to address this was to flee and attack whichever T’lan enemy was keeping up with me, picking off the group one by one. This tactic wasn’t pretty or enjoyable, but it got the job done. Human soldiers could be equally deadly and more annoying. Using their firearms with pinpoint accuracy, they’d whittle my health down absurdly fast. My firearms were just as powerful but far less accurate, despite the fact that I couldn’t manually aim: I was locked-on just like when brawling. Even on the easiest difficulty, the game had some seriously frustrating encounters. Perhaps to compensate, soda machines were everywhere.

At the onset, Derrick, amnesiac and an apparent test subject awoke in a research facility. Things went awry quickly when soldiers stormed in and began executing the scientists. He was rescued by the mysterious and extremely capable Alex. Together, they hurried through seemingly endless hallways, bypassing dozens of locked doors in the search for the one that granted passage. This level design permeated way too much of the game; I’d wager at least a third of my ten hour playthrough was spent traversing uninteresting passageways, if not more. This uninspired level design was separate from the environment design which later on, specifically in the T’lan bastion Site Zero, was alien and striking. Unfortunately, my understanding of the narrative and Derrick’s role unraveled in a dull manner befitting the level design.

Primarily via clipboards scattered around the research facilities, I learned that the nascent T’lan had resided underground for hundreds of millions of years. Humans discovered them about a decade ago and in the years that followed, the American and Japanese governments conducted secret research with militaristic ambitions. Of the test subjects injected with T’langen, a substance recovered from Site Zero that produced superhuman abilities, Derrick was the sole survivor. The T’lan, directed by an organism known as Nexus, were fighting back. Naturally, Alex and Derrick were the only two skilled enough to stop them. Along the way, the duo obtained assistance and background information from a few other bit characters but like Alex, everyone retained an air of mystery. The interspecies aggression came to a head in the heart of Site Zero.

Initially appearing to be an idyllic natural space, the façade of Site Zero gave way as Derrick ventured further in. Behind the scenes, he clambered inside organic narrow vessels, seemingly alive, making his way from one to another amid a never-ending factory of rockets of T’lan. Once outside and close to Nexus, the silvery ground met an ominous orange sky, organic rockets standing like spires as far as I could see. It was really something to behold and in stark contrast to the derivative office spaces from before. After his initial failure and reawakening as described earlier, his abilities were enhanced further. Powerful enough to defeat Solus and destroy Nexus, he was sent back in time. Arriving soon after his entrance to Site Zero, I replayed much of this section. Having to retread familiar ground was offset by my enthusiasm in seeing a few minor alterations lead to an entirely different result.

In the end, my memories of Breakdown were rosier than they ought to have been. The slavish devotion to the first-person perspective and unique brawling gameplay proved worthy of remembrance, but weren’t without fault. Any confrontation involving more than one foe demonstrated faults with the lock-on targeting and inability to deal with crowds. Firearms were no exception and, like the level design, were unimpressive. Conversely, the environmental designs of Site Zero were remarkable. Unraveling the mysteries of the narrative and motives of the characters kept me engaged in spite of the substandard presentation: clipboards. A promising game, Breakdown was a mixed bag of interesting concepts, mysterious narrative beats, and tepid filler content I won’t soon forget.