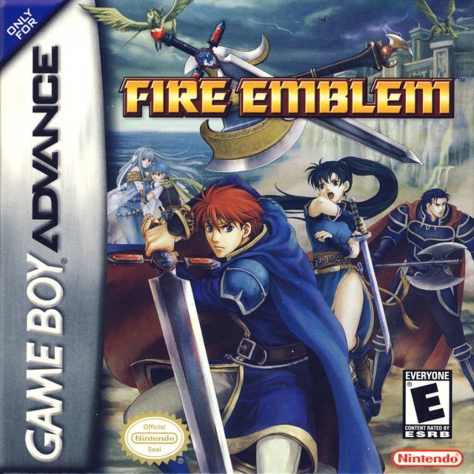 When Nintendo of America published Fire Emblem for the Game Boy Advance on November 3, 2003, it marked the end of a decade-long drought. The seventh entry in the series, now canonically known as Fire Emblem: The Blazing Blade, was the first to be released in the west. Set on the fictional continent of Elibe during an era of swords, sorcery, and dragons it told a predictable legend of good vs. evil, rife with archetypal characters and intricate details. While the turn-based tactical gameplay was impressively executed and multifaceted, it could be frustratingly difficult. I found it borderline obstructionist but nonetheless, persisted. Although my playthrough was peppered with demoralizing losses, perhaps more impactful than the rewarding victories, I’d do it all over again.

Serving as a prequel to its predecessor The Binding Blade, this game followed a trio of nobility through separate story arcs. The first centered on Lyndis, a recently orphaned plains-dweller who learned of her noble lineage and claim to the throne of Caelin, a territory within the country of Lycia. Journeying from the plains to her grandfather’s castle, she battled often against the forces of her wicked granduncle. Accompanied by an ever expanding cadre of soldiers, mercenaries, and mages, little stood in her way. Comprising ten chapters and totaling about seven hours, this section served as a tutorial, introducing me to the various classes, battle conditions, and gameplay mechanics I’d encounter throughout the game. When Lyn’s story concluded, the game’s focus shifted to a son’s search for his missing father.

Set a year after the events of the Lyn’s story arc, the narrative core of the game began with Eliwood’s search for the marquess of Pherae, his missing father. Joined by Hector, his longtime friend and brother to the marquess of Ostia, another territory within Lycia like Pherae, their search uncovered a shadowy organization of assassins calling themselves the Black Fang. Led by the soul-sucking Nergal, he planned on conquering the world by summoning dragons, once banished to another realm after centuries of conflict between their kind and humanity. Enlisting the assistance of Hector, Lyn, and many others recruited along the way, Eliwood committed himself to stopping Nergal. Unsurprisingly, the forces of good triumphed over evil but interest never waned thanks to ample exposition and character development.

Told predominantly through lengthy cutscenes bookending battles, the two-pronged story was predictable but entertaining. I relished the opportunity to advance the plot but with so many territories and countries, it was hard to keep track of their leaders and the politics between them, even with extensive note taking. Amongst the large cast of characters, Lyn, Eliwood, and Hector were the most fleshed out due to their role as the primary protagonists. However, the amount of exposition and background information that was obtained through mid-battle support conversations, even for minor characters was immense. Many of these relationship pairings were obvious and for those that weren’t, they weren’t terribly obfuscated either; there was someone I could speak to before battles to view them. When the fighting began, one constant remained: this game was tough!

Since the release of Awakening in early 2013, I’ve considered myself a fan of the series and convert to the genre. Prior to that game’s release, I dabbled with the genre but inevitably grew frustrated with the difficulty of whichever game I played. Much younger then, and undoubtedly possessing a shorter attention span, I felt as though games in the genre eventually devolved into missions with a specific “right” way to complete them. The zeitgeist surrounding Awakening prompted a friend and I to play The Sacred Stones, the unconnected follow-up to this entry and since then, I’ve approached the genre with a more mature, analytical behavior. Generally speaking, there’s rarely a solitary “right” way to eke out a victory but to be successful, I’ve learned to take everything into consideration, and I mean everything.

For me, success followed when I played like I was driving a car. When I’m behind the wheel, I’m devoted to the act of driving, remaining intently focused on my surroundings and the vehicle itself. In determining which party members to bring into battles, I’d study who I was fighting, their weapons, the terrain and more. Once I assembled a suitable, well-equipped party, I’d play defensively and let the aggressive enemies come to me. With those foes sorted, I’d go on the offensive, carefully analyzing the movement and attack range of almost everyone each turn. Doing so allowed me to appropriately prepare for confrontations, steal items, and distribute experience as I desired. Approaching the game in such a fashion was exhausting, like taking a road trip, but there was no greater feeling then a perfectly executed victory. Conversely…

Victory tasted so sweet in part because this was a strict, punishing game. If I was not considering the range and equipment of every enemy, their strengths and weaknesses, and doing so a turn (or more) ahead, I’d pay dearly. They’d swiftly kill a party member who’d then remain forever inaccessible due to the game’s permanent death feature. For a perfectionist like me, this meant restarting chapters a sickening number of times. Lacking a battle save feature, restarting or having a primary character killed resulted in retrying a chapter from the very beginning, perhaps losing an hour or more of progress. This happened frequently and it was incredibly frustrating. I came close to giving up multiple times and took many extended breaks from the game, which I began October 22, 2017 yet only recently completed.

To my surprise, a third story arc became available upon completion of the game: a retelling of Eliwood’s from Hector’s perspective. Feeling equal parts satisfied and relieved, I declined. Although I persevered, Fire Emblem’s difficulty was at times a hindrance. If I failed to devote my full attention in battle, a simple oversight could result in a game over and the corresponding loss of an hour’s worth of effort. It was so enjoyable to execute a strategy successfully though, and almost made up for all the hassle. The comforting saga of good vs. evil and the players themselves weren’t particularly noteworthy, but they carried my interest to the very end. Should I return to Fire Emblem in the future, I’ll have Hector’s story arc to look forward to. Not to mention a harder difficulty level…