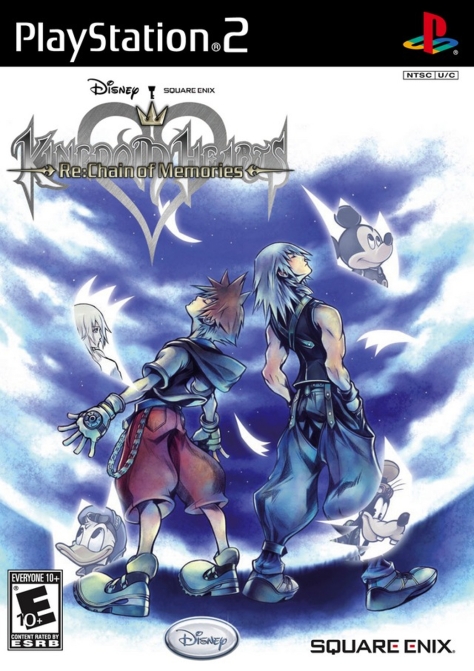 With Kingdom Hearts completed, the logical next step in my exploration of the series was Kingdom Hearts Re:Chain of Memories. Designed as a connecting thread between the first game and the then-impending sequel, Chain of Memories was outsourced to Jupiter Corporation, the Japanese developer perhaps best known for their Nintendo published Picross titles. It was released for the Game Boy Advance in Japan on November 11, 2004, with its American debut following less than a month later. Square Enix then remade it for the PlayStation 2 and included it as a bonus with the Japanese release of Kingdom Hearts II Final Mix on March 29, 2007. This version received a standalone release in North America on December 2, 2008 and was eventually enhanced further in the PlayStation 3 compilation Kingdom Hearts HD 1.5 ReMIX, which is the way I experienced it.

Chain of Memories is a quasi retelling of the events of the first game. At the conclusion of Kingdom Hearts, Sora, Donald, and Goofy wandered off into the sunset in an endless pastoral field, resuming their search for King Mickey, Kairi, and Riku. This game begins with them in the same field, coming upon Castle Oblivion. Believing their friends could be inside, the trio enters. Instead, they encountered deception, where their memories vanished as they ascended the castle’s thirteen floors. At the center of it all was a girl.

While the series has become known for its convoluted narrative, I didn’t find that to be the case with the first game. However, it seems with this entry, the series was beginning to earn that reputation, specifically with the introduction of Organization XIII. Dressed in hooded trench coats and bearing stylish anime hair and varying collections of chains and zippers, they antagonistically interrupted the trio’s journey inside Castle Oblivion frequently, but were vested in Sora reaching the top nonetheless. Their intentions were revealed by the end, but their origins remained a mystery.

The girl at the center of it all was a young witch known as Naminé. She had the power to manipulate memories, and in this instance, was creating false memories for Sora so the Organization could control him. Although she was being held against her will by the Organization, she was not entirely innocent. In her loneliness, she began to replace Sora’s memories of Kairi with herself. As Sora climbed higher into the castle and forgot more, he began to remember his childhood on the Destiny Islands differently. When things straightened out, he was sympathetic to her plight, and as Goofy insinuated, maybe a bit thirsty.

Sora’s forgotten memories were represented as cards inside Castle Oblivion. Some of these were required to open doors inside the castle and when used, created versions of the places he’d been before. Going back to these worlds, the trio interacted with the same characters and experienced dilemmas comparable to those they resolved in the first game. Thankfully, these storylines were not identical to what I had just played through. The events and conversations unfolded as if this was the first time any of it happened and truthfully, it was. These were not the actual characters and places they’d been, but figments created from Sora’s memories.

The environments and characters looked amazing, and although this is a high definition remaster, I believe that’s because the source material was so well done. The stylized cartoonish graphics fit the source material perfectly and Yoko Shimomura’s wonderful soundtrack was just the tops. However, the game’s production values were noticeably lower in comparison to its brethren on the PlayStation 2. These praise-worthy elements, the design and the soundtrack, were copied verbatim from the entries that narratively sandwich it. And, there’s a noticeable disparity regarding the amount of voice-acting. But considering the basis of this game, it’s understandable that there’s so much recycled content. Not to mention the fact that this was originally included as a free pack-in bonus. I suppose that this version exists at all is pretty awesome.

Intriguingly, the pace and difficulty of progression was up to me. Similar to the act of creating worlds, Sora also created the rooms they traipsed through with Map Cads. There were about two-dozen unique types of Map Cards I could collect and select from, each with their own unique properties. They fell into four types: red Enemy cards tailored the enemies I fought, green Status cards applied beneficial buffs, blue Bounty cards provided physical gifts such as treasure or save points, and yellow Keycards progressed the story. The layout and number of rooms in each world was unchanging, but there were always three in which the local storyline unfolded. As a result, these stories were simple and formulaic but nonetheless contributed to the overarching storyline by referencing a changing aspect of Sora’s memory.

Besides requiring the use of a certain color, most doorways also required a specific number, or range of numbers to be on the card. Each Map Card I collected was numbered 0-9, with those 0 cards serving as trump cards. These requirements limited my choices, but it wasn’t bothersome until the final world, which was far more expansive than any I’d journeyed through previously. For most of my thirty hour playthrough, I took an even-handed approach using each type of card equally. Occasionally, when a session was dragging on, I began to cheese it and make rooms with treasure chests or weak enemies. Like with the first game, the worlds took about two hours start to finish, so I was able to make worthwhile progress in a single session.

Considering the aggressiveness of some bosses, I imagine the game could’ve gotten very frustrating if I avoided making challenging rooms. In my playthrough, there were one or two instances where the difficulty spiked and I had to research battle strategies to continue making progress. As with everything else in Castle Oblivion, Sora utilized a deck of cards to fight against the Heartless and Organization XIII. When used in battle, the cards materialized Keyblades, casted spells, summoned allies, and used items. Similar to the Map Cards, they also were numbered from 0-9, indicating their strength and ability to counter an enemy’s selection. Furthermore, up to three of them could be stacked to increase their power and unleash special attacks.

When Sora made contact with a Heartless, the game transitioned to a battle scene where I fought waves of enemies in a set arena. I could freely move Sora but had to select cards to trigger his actions. The deck of cards I created was presented in roulette fashion on the bottom left corner of the screen, and could be cycled through with the L1 and R1 buttons. Avoiding attacks, countering enemy cards, and selecting exactly what I wanted to use was cumbersome. It took me a long time to not only get comfortable with the process, but calmly make split-second decisions and not just throw away a card when an enemy used something stronger.

As I mentioned, there were a couple of bosses that forced me to research strategies that I had not independently thought of. There was a lot of depth hidden within the combat but like the first game, it was on the player to experiment and figure out what worked. I got by with a basic, balanced deck of cards for a while but hit a wall about halfway through. Based on strategies espoused within GameFAQs forums and IGN wikis, I built a deck around the Sonic Blade sleight. This special attack triggered when I stacked three different Keyblade cards with a combined power of 20-23. It jettisoned Sora towards an enemy and if I timed my button presses correctly, could strike up to seven times. This attack made mincemeat of my foes, absolutely wrecking them, and brought the difficulty back down to a manageable level.

Because my focus was so narrow: just wanting to experience the story, I didn’t spend considerable time experimenting with the sleights Sora learned. That said I still got loads of enjoyment out of the game, besides just the continuation of Sora’s journey. True, I relished the between worlds exposition, as the trio learned of Naminé and Organization XIII. But I also took to the combat, which was unlike anything I’ve played before. It was unnatural and cumbersome initially but as was the case with the first game, a rewarding and complex level of depth was revealed over time. Similarly, the customization aspects, the deck-building and world building, were unique features that I grew to like more the longer I played. Although it started off as a retelling of previously experienced events, Kingdom Hearts Re:Chain of Memories proved to be much more than the sum of its parts.