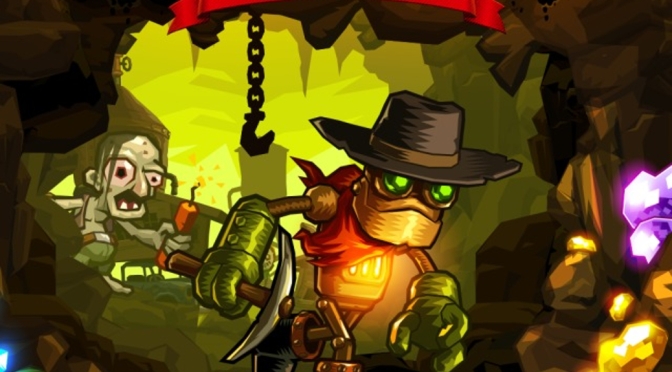 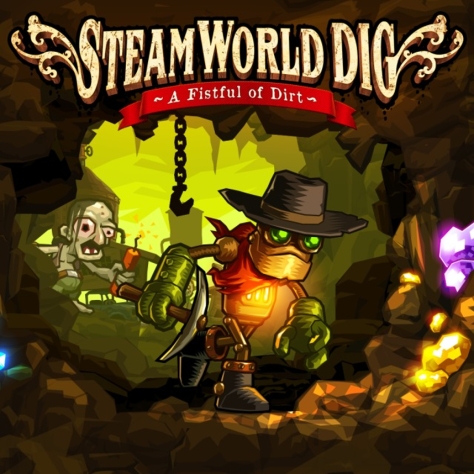 While SteamWorld Dig is the second entry in a versatile series of steampunk video games, it was the first that caught my attention. In part, because it has appeared on every major platform since in debuted on the Nintendo 3DS in August 2013; and for good reason, it turns out. The mining gameplay bears a resemblance to the classic Namco games Dig Dug and Mr. Driller, but Gothenburg, Sweden-based Image & Form Games were able to carve out a unique identity for SteamWorld Dig by elaborating upon the basic gameplay foundations introduced in those games.

Arriving in Tumbleton, a practical ghost town, after his recently decommissioned uncle deeded him a mine, Rusty began exploring it for answers. As he tried to get to the bottom of the mystery, the town flourished with the valuable ore he brought back to the surface. The western-themed town grew with more odd merchants looking to make a buck while outfitting Rusty with ever better gear. They rarely espoused new dialogue and there was very little overt storytelling, but the six-hour runtime was plenty for everyone’s personality to shine.

Controlling Rusty, I broke apart the ground beneath his feet digging deeper and deeper into the mine. I created pathways, defeated enemies, and located rooms that offered upgraded abilities. Some optional rooms offered valuable rewards for overcoming intriguing puzzle platforming challenges. Once Rusty’s pack was full, I’d return to the surface to sell the loot, purchase any available upgrades, and return to the mine to get a little deeper. This gameplay loop made up the game and proved to be enjoyably addicting. There was always new gear awaiting me in the shops and there were even a few upgrades remaining when I beat the game.

I continued to refine my mining techniques throughout my playthrough. Perhaps the most important design feature I learned to implement was to dig out a horizontal section before digging deeper, in case I needed to return to the surface before finding another pneumatic tube or teleporter. Upgraded gear such as drills and new abilities like wall jumping, allowed me to implement different designs and more freely explore the mine. Enemies were prevalent but weren’t a major threat; my ineptitude brought about most of my few dozen deaths. A boss fight, the only one, capped off the game in an exciting fashion. It wasn’t difficult, but required that I put to use most of the platforming tricks I’d learned.

SteamWorld Dig was succinct and enjoyable. The western-themed steampunk world was novel and the cast of characters that populated it while reticent, were nonetheless entertaining. Similarly, the soundtrack was evocative of spaghetti westerns but managed a level of ambience to let the mining gameplay shine. That gameplay was reminiscent of certain classic games but the developers mined elsewhere for inspiration; specifically, they hit upon enjoyable platforming abilities ala Metroid and struck gold with an addictive upgrade loop common with RPGs. Needless to say, it’s a game I really dug.