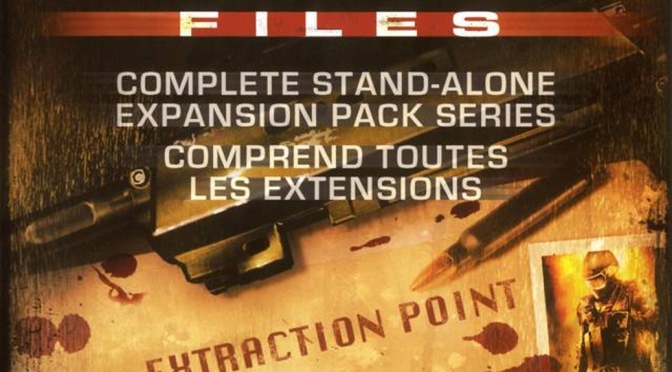 Exclusive to the Xbox 360, F.E.A.R. Files is a compilation of Extraction Point and Perseus Mandate, the two expansion packs for the horror-themed first-person shooter F.E.A.R. First Encounter Assault Recon. Unlike the original game, which was developed by Monolith Productions, these expansions were handled by the now defunct TimeGate Studios, based out of Sugarland, Texas. Extraction Point debuted on PCs in October 2006, a year after the base game. It picked up immediately after the end of F.E.A.R., directly continuing the story of the Point Man, that game’s protagonist. Perseus Mandate followed in November 2007, releasing simultaneously on PCs and the Xbox 360. The exploits of a separate F.E.A.R. team, acting concurrently with the Point Man’s, were detailed in this expansion. As was the case with the base game, it was ported to the Xbox 360 by Day 1 Studios and published by Sierra Entertainment.

When I say Extraction Point picked up immediately where the base game left off, I mean it: their ending and beginning cutscenes segued together. The Point Man, fellow F.E.A.R. member Jin Sun-Kwon, and Delta Force Sergeant Douglas Holiday just escaped the massive explosion that destroyed the Origin Facility, where Alma was contained, when their helicopter crashes. Separated, they navigated eerily empty city streets, speculating that the population must’ve been evacuated as though a nuclear bomb was scheduled to drop. It wasn’t totally deserted, however. Replica soldiers stood around, lifeless. With the death of Paxton Fettel, their psychic commander, it seemed they had been “decommissioned.” Unfortunately, this was a brief reprieve. A mysteriously revived Fettel made himself known to the Point Man, expressing his personal bewilderment on how this was, and that he didn’t like being killed.

From that point on, the moment-to-moment gameplay of Extraction Point continued on in a familiar manner. Controlling the Point Man, who was in frequent radio contact with his colleagues, and even fought alongside Holiday for a mission or two, I navigated church catacombs, a subway system, and many hallways reminiscent of the base game. Firefights were largely confined to interior environments where enemies weaved in between rooms, used tables for cover, and peaked out into hallways. These cramped arenas allowed for a borderline tactical methodology of sweeping a floor room by room. Stealth never played a role, however. When the Point Man encountered opposition, this was a balls to the wall action game and I played it as such, often rushing towards enemies in slow-motion with my shotgun.

While a significant portion of the game was guns blazing action, an equal amount of time was spent tensely creeping through the dark. In this regard, the spectral elements were also unchanged. Alma and Fettel continued to inflict their hijinks upon the Point Man, subjecting him to horrific glimpses of her past, ominous visions, and attacks from otherworldly creatures. More than awful sights or jump scares though, the game’s atmosphere induced nervousness. It’s pretty easy for me to buy-in to the scary elements of a game like this by playing alone in the dark and imagining myself in the world, but the myriad of creepy sounds and use of lighting helped to sell the fear.

Perseus Mandate contained all these aspects, and little more. Playing as an unnamed Sergeant in a three-man F.E.A.R. squad, I experienced the same sorts of gunfights and sinister atmospheres from the two prior entries. The assignment this squad was sent on ran concurrently with the events of its predecessors, and sometimes through the same environments, which was a treat for me. I was genuinely interested in seeing events unfold from this group’s perspective, and to get more backstory and information on certain characters. Owing a lot to the premise behind it all, the American government secretly experimenting with psychic powers for military gain and then having to deal with the rage-filled retribution of their test subject, the lore of these games was more robust than the average first-person shooter. Key facts were discovered through hallucinations, informational collectibles, and then sussed out by team members over the radio.

Both expansions introduced a handful of new weapons. Some were down-to-earth like the surly minigun while most were more experimental, and harnessed electricity or energy in unique ways. New enemy types, multiplayer options, and Instant Action maps rounded out the additions. The Instant Action maps were particularly engaging, and much more creative than those in the original game. Eight in total, they tasked me with surviving challenging story-free missions and then graded my performance. One tasked me with clearing a building of enemies, but without the aid of med kits. Instead, there were health boosters (which slightly increased my health and fully replenished it) and other supplies between the rooms. This forced me to play safer than I otherwise would have. Another favorite took place in a large circular outdoor environment, and was a straight-up horde mode affair. It would’ve been great to play with friends!

This compilation didn’t introduce anything that evolutionary to the F.E.A.R. experience, however. Extraction Point and Perseus Mandate furthered the original game’s narrative with a few revelatory developments but they were, faithfully, more of the same, which was fine by me! I thought F.E.A.R. successfully blended intense first-person shooter combat and legitimately frightening moments of exploration. These games balanced those elements well while incorporating new trappings in shorter runtimes (each expansion took about five hours to complete). Those story developments are mostly all for naught though, as these two are considered non-canonical to the overarching narrative. While I’ll likely discover that Extraction Point and Perseus Mandate provided unrecognized plot developments, that doesn’t change the fact that they were enjoyable additions to the series.