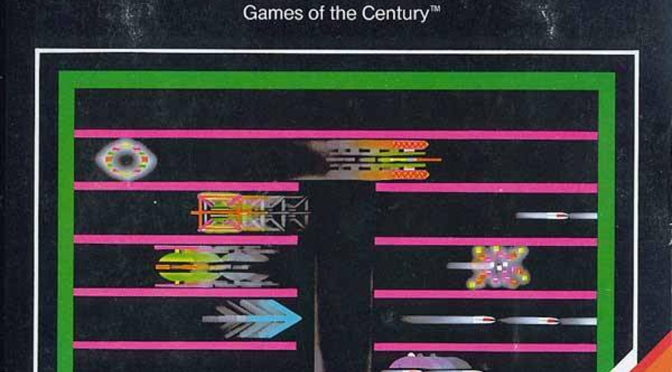 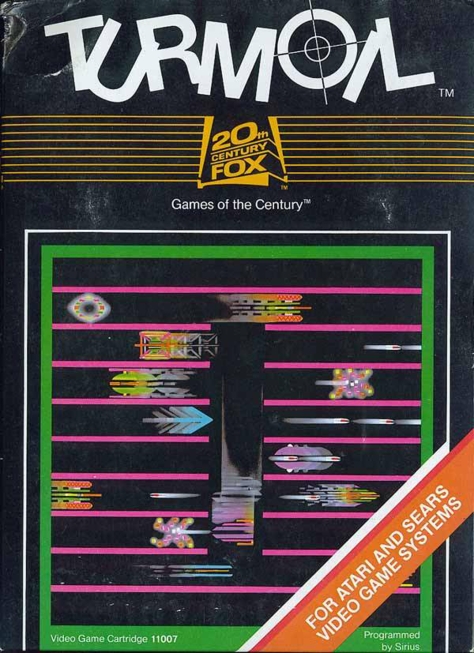 If I’m not mistaken, I acquired this game at the 2014 Oklahoma Video Game Expo for about a buck. That was many months ago now and I’ve yet to play it. I don’t anticipate playing it anytime soon either. It looks like a fast playing shoot ‘em up for the Atari 2600, not too dissimilar from Tempest. The player’s ship remains in the center of the screen, surrounded by about five pathways on either side. Enemy ships zoom between each side of the screen while the player attempts to stay alive by destroying or avoiding them.

Perhaps the most interesting factoid about Turmoil is the fact that it was designed by Mark Turmell. He later went on to design Smash T.V., NBA Jam, and NFL Blitz, among others. He was working for Sirius Software at the time and the game was published by 20th Century Fox. It was released in North America around 1982 on the Atari 2600. It also had releases on Atari’s line of 8-bit computers, the Commodore VIC-20 and C-64, and on MSX computers. 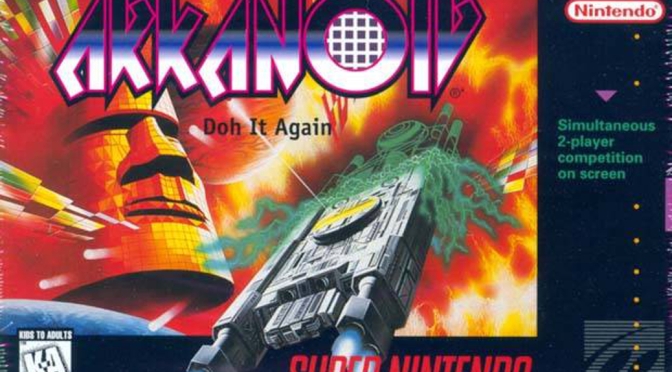 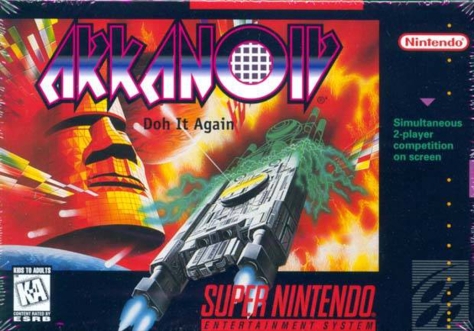 My interest in the Arkanoid series piqued after reading a Retro Gamer article chronicling the series. I’d never played a game in the series, although like most everyone else, had played a game like it. So, when the Oklahoma Video Game Exhibition came around and I found what I believed to be a reasonably-priced complete copy of Arkanoid: Doh It Again, I snagged it. Since then, I’ve played the game a great deal, enough to beat it, even. There were interesting touches to differentiate it from other similar games, although I eventually grew bored of it. The bulk of my time was enjoyable, but the times that weren’t, were tortuous.

The game consisted of 99 rounds with each one featuring a unique arrangement of blocks. Most were easy, usually requiring no more than a handful of attempts. However, there were a few, particularly rounds 95 and 99 that took me upwards of fifty attempts; seriously, like fifty attempts. These were awful and truly tested my determination to see the end. Generally, the tougher rounds were made so due to the inclusion of gray and gold blocks. Gray ones took multiple hits to destroy while gold ones were unbreakable. When these were used in combination, and arranged in specific ways, my success was based on persistence and a lot of luck.

Breaking up the formula were boss fights. These took place every eleven rounds and featured one of three bosses. If you’ve done the math, you know that means I fought each boss three times! This was a letdown, especially when I reached round 99 and sure enough, just a repeated boss. To be fair, they grew tougher with each appearance, although nothing else changed about them. I simply had to hit them more times. And, as I mentioned in the previous paragraph, the final round ate up my time and patience. Eventually though, I overcame, able to walk away with the satisfaction of beating the game, and little else.

Two-player modes (competitive and cooperative) round out the game and enhance the replayability. Honestly, this is where the game shines, too. Playing solo, the game represents a near-perfect podcast game, which is to say it can be a little boring. Throwing another person into the mix livens the atmosphere and makes for a fun experience – specifically cooperatively. There is a level editor mode as well, but that’s not my cup of tea; and the game also supports the SNES mouse which seems like an odd bullet point, but it probably has its perks in level creation.

Arkanoid: Doh It Again doesn’t have a lot going for it. Persisting through the game’s 99 rounds yields some good times, but eventually, those are overshadowed by the hours spent beating a select few stages. I’m still interested in playing other games in the series, but won’t necessarily seek them out. Perhaps the biggest personal revelation, however, was the fact that this game came out on the Super Nintendo in November 1997. That’s so late in the SNES’ lifecycle! I mean, November 1997. NOVEMBER. 1997.

I capped off my week in a fine way yesterday by attending the 2012 Oklahoma Video Game Expo. Held in Bixby, Oklahoma, a suburb of Tulsa, the convention featured many retailers and vendors hawking all sorts of classic video games. Seeing harder-to-find games and systems was sweet, but the best part was that tons were hooked up and available for anyone to play! I attended last year and not much has changed, but this time I spent most of my time actually playing games.

The moment I walked in I began playing Tempest 2000 for the Atari Jaguar. The game is a remake of the classic arcade game but what’s most notable is designer Jeff Minter’s trademark psychedelic neon graphics and techno soundtrack. Afterwards I dabbled a bit with various home console games before finishing off along the wall of arcades and pinball machines. My friend and I had competitive matches in Street Fighter II: Champion Edition and a SNK vs. Capcom fighting game. We also competed in Pengo (a Sega game from 1982), Donkey Kong Junior, and a few others. I felt like I was among like-minded people and there was a super positive energy throughout.

Okay. So I have been to the Oklahoma Video Game Expo before, but that was a couple of years ago. The OVGE 2011 was held on June 18, 2011 (last Saturday) and I attended it with a pal. It ran from 9 AM to 5 PM, but I had to work at 11 AM so I didn’t get to stay long, but I experienced a lot that was there. The thing I enjoyed most about the expo was the atmosphere. The passion for video games had brought us all there, and the few conversations I did have, were just great.

Admission was five dollars and the first table we checked out was a retailer from St. Louis. He had some harder to find games for an array of consoles. Vendors were in the majority at the OVGE 2011, and vendors specializing in older, harder to find games more specifically. The next table was a vendor as well. But after that was a table run by a very enthusiastic gentleman. He was hosting the “Bad Game Beatdown”, displaying his collection of notoriously bad video games.

Proceeding along we walked along a wall filled with about twenty arcade and pinball machines. My friend and I played game of Street Fighter II: Champion Edition, I lost. We checked out a table with many old computers and I played a little bit of Zork I. We checked out some more vendors, among them some local favorites, Vintage Stock and GameXChange.

In between that however, we had a good chat with the dudes who run Nintendo Okie. They were asking trivia questions to anyone who wanted a shot at winning a free game. We both attempted and lost. We definitely enjoyed it though.

And the most important conversation for me was getting to talk to Brett Weiss, basically asking him many questions. He has written a couple of books dedicated to describing every North American video game release for specific consoles. For instance his book Classic Home Video Games: 1985-1988 covers every North American release for the Atari 7800, Nintendo Entertainment System, and the Sega Master System, all released within that time frame. The books in this series are basically reference guides, and they’re right up my alley. I really enjoyed talking with him.

That pretty much sums up my experience with the OVGE 2011. There was of course much more going on throughout the day, but I wasn’t fortunate enough to stay. There were also many more vendors and exhibitors that I didn’t mention. I refrained from making any purchases, although I was tempted by many items. I’m looking forward to attending next year’s expo, hopefully staying much longer, getting to experience many classic video games and have plenty of conversations.

And that’s all I played, but there are two other things of note I did last week.

I attended the Oklahoma Video Game Expo on Saturday (June 18, 2011). It was held in Bixby, Oklahoma at the SpiritBank Event Center. I went with a friend and couldn’t stay that long as I also had to work that day, but for the short amount of time I was there I could tell the atmosphere was very friendly. It wasn’t that large but there was enough there to merit a post about. I will talk about it more in-depth this week.

I also purchased a stack of thirty-four Nintendo Power magazines from the late eighties and early nineties, so yeah. I picked them up at an estate sale and was ecstatic to see the first issue of Nintendo Power was there.

Anyways I’ll keep trucking in Vanquish, post my thoughts about the OVGE this week, maybe along with another article.