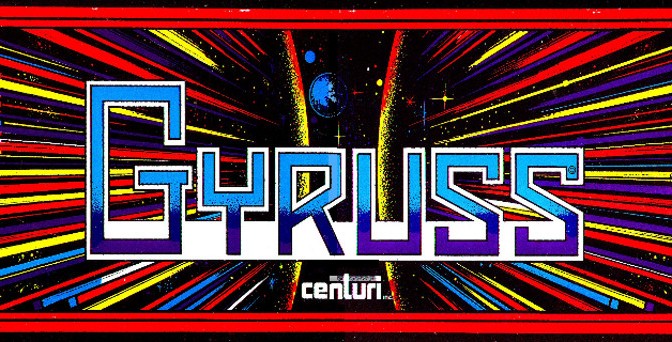 Having grown up in the 1990s and 2000s, I didn’t really have the opportunity to spend time at an arcade. When PJ Gamers opened up in Broken Arrow, Oklahoma and did so with dozens of arcade cabinets, I was excited. More so than any other, Gyruss has captivated me. It’s a 1983 space shooter emulating the gameplay styles of Galaga and Tempest, in fantastic fashion. Besides featuring pure gameplay that’s so common in most arcade classics, a high score competition between my friend and I has kept me hooked.

Controlling a spaceship and having it revolve around the screen in a tubular manner took some getting used to. The spaceship mirrored the position of the joystick, which I haven’t experienced too often. Likewise, the waves of enemy spacecraft entered the screen any which way across the twenty unique stages. There were enough enemy types and wave formations to keep the game fresh and the sole power-up was fun to obtain, and definitely worthwhile. Another holdover from Galaga were the challenging stages breaking up the pace. Memorization proved to be influential in succeeding, but so too were quick reflexes and calmness.

Having spent enough time learning the gameplay and adapting to the rule set, success was ultimately, in my hands. After a month or so, my friend still reigns supreme with a score only 10,000 or so more than 200,000 odd points. I’ve lost the fire to try multiple times a week, but I do give it a shot every time I visit PJ Gamers. Gyruss has tuned into one of my favorite arcade games and I believe it to be incredibly indicative of the golden age of arcades. This, because of its pure, simple gameplay and rule set and its emulation of the pioneers that came before it. Ironically, these elements make it feel unique, while still feeling so similar to its golden age contemporaries.