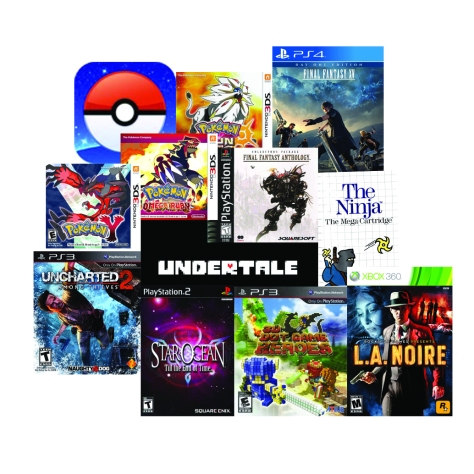 Damn, what a year! In a lot of ways, it seemed to be one long downer, a year devoid of hope for many. I’m very fortunate in many ways and as this year winds down I’m going to look forward to 2017 and aim to devote more of my time to outlets that benefit others. As it stands now, much of my spare time in 2016 was devoted to video games and related interests. As I’ve done yearly, I’ll compile the ten favorite games I played this year, in alphabetical order. Per routine, this list is not limited to brand new releases but instead is based off what I actually played. When applicable, I’ll link to any articles I wrote during the year.

3D Dot Game Heroes – This was a game I’d been eyeing since it’s initial release on the PlayStation 3 back in 2009. It didn’t disappoint. Gameplay resembled that of The Legend of Zelda: A Link to the Past and it played exceptionally. What surprised me were the myriad of references and homages to the classic RPGs of the late 1980s and early 1990s, many that  likely went right over my head! The chiptune soundtrack was nostalgic yet modern, something that puts a smile on my face when it shuffles into play today. A wonderful time for anyone with nostalgia or an appreciation for classic Japanese RPGs.

Final Fantasy VI – In my review, I came off a little sour. There were many reasons for that but it’s hard to argue this isn’t the pinnacle of 2D JRPGs. Looking back on my time with it, even this soon after completing it, my thoughts have grown rosier. I’ll be happy when I can replay it and give it a fairer shake. Until then, Final Fantasy VII is calling my name…

Final Fantasy XV – … Before VII consumed too much of my time though, this behemoth released. I just completed this game a few days ago and my review will be forthcoming (including a podcast), but just know that this game caused so much internal strife. It was chock-full of so many annoyances and frustrating design decisions and yet, I was glued to it everyday for about 3 hours since it launched.

L.A. Noire – Again, another game that consumed so much of my time in the latter portion of this year that I have yet to write about. I have developed an admiration of the film noir genre over the years and this game is essentially a compilation of the genre’s greatest hits, inside a luscious recreation of Los Angeles circa 1947. The attention-to-detail in every nook and cranny of this six year old game is still astounding. And, it stands as one of the few games I played this year where I felt compelled to obtain every achievement/trophy.

The Ninja – There were a few other Master System titles that I enjoyed just as much (Ys: The Vanished Omens and Space Harrier) but it’s hard not to give it to this game, if only considering the total surprise it was! Behind the generic title was a challenging run n’ gun shoot ’em up that I was addicted to. It look me so long to “perfect” the stages and beat the game, but the fast-paced action and responsive gameplay made sure I wanted to continue devoting the time required.

Pokemon Go – I doubt this would be included if this was a list of the best games I played this year, due to numerous frustrations and changes, but this is undoubtedly one of the most important games of the year. Coincidentally, I also had a blast playing this game for about a month. Unlike anything I’d played before (considering I never gave Ingress a chance), I have many fond memories hunting with friends, meeting new people, and exploring local parks and establishments that had otherwise been off my radar. The thought of firing it back up continues to cross my mind, and it’s still installed on my phone, but that time hasn’t come.

Pokemon Y/Omega Ruby/Sun – Of these three, Y provided me with the most enjoyment this year. It reinvigorated my love for the series thanks to a host of new features and robust graphics. Omega Ruby proved to be the odd one out. I should’ve liked it the most, but I suspect completing Pokemon Emerald fairly recently meant another playthrough in Hoenn was too soon. Lastly, Sun is still absorbing my free time. I’ve yet to beat it, but it’s the freshest take on the core Pokemon series since inception. A refreshing take that has more hopeful for the future.

Star Ocean: Till the End of Time – This game hails from my “golden age” of RPGs and I’m so thankful to have finally played it. A plot twist that caught me off guard and evolving gameplay mechanics helped to redeem this action-RPG after a slow start. I’ve yet to play the sequel, but everything I’ve heard has indicated I’ve reached the crescendo of the series with this entry.

Uncharted 2: Among Thieves – Maybe the most impressive game I’ve ever played. This was such a cinematic thrill ride with unforgettable set pieces and characters. The third-person cover-based shooting was pretty good to boot!

Undertale – This was the first game I beat this year, alongside a friend, even! After hearing all the hubbub for this game I decided we needed to play it. Never have I laughed so hard at a game. I, literally, almost fell out of my chair. Every aspect of this game, the gameplay, characters, visuals, soundtrack, were so obviously crafted with TLC. It’s maybe the most endearing game I’ve played. AND THE TRUE ENDING! Oh man, actually “figuring” the game out! What a challenge. My friend and I will continue searching for a game that will provide us with this mishmash of perfection, knowing nothing will ever top this. Maybe we’ll just replay Undertale…