I had a pretty memorable Independence Day this year. Among other reasons, I finally sat down and played through Incredible Crisis. It’s a quirky game that has been on my backlog for a while now, and on my radar for even longer; I probably first learned of it surfing the net in the mid 2000s. For me, it’s remained a stalwart example of the scores of zany Japanese games that somehow saw release in the west during the late 1990s and the mid 2000s. Maybe off-the-wall games like it had been, and perhaps remain, prevalent in Japan, but at least in the west, it seemed like they came and went during these years. END_OF_DOCUMENT_TOKEN_TO_BE_REPLACED 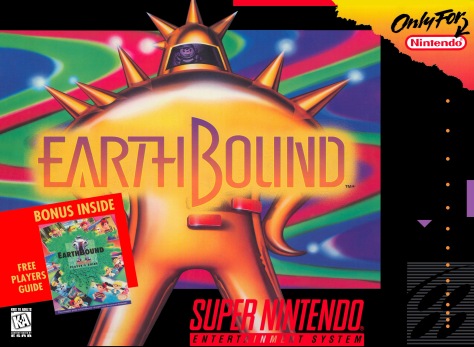 Probably the quintessential example of a cult classic in the video game industry, at least here in the United States, the Super Nintendo RPG EarthBound had an underwhelming debut when Nintendo released it June 5, 1995. The SNES was reaching the end of its commercial lifecycle, and RPGs on the system had matured to include ever more complex gameplay systems and grandiose visuals. Heck, the Sega Saturn had released a month prior, Sony’s PlayStation was on the horizon, and Nintendo was already discussing the next generation Ultra 64 publicly, so it seemed 2D graphics were on their way out. Yet here comes this simplistic looking game based in a reality not unlike our own instead of an imaginative fantasy or sci-fi backdrop. Similarly, the plain combat system could’ve been considered a throwback, even then. But, there was an audience for the game, and in the years since its debut, that audience has grown into a thriving fandom. Now that I’ve experienced firsthand the charming, unique adventure that EarthBound offers, a fandom so vibrant is well deserved, I’d say. END_OF_DOCUMENT_TOKEN_TO_BE_REPLACED

Satisfied with my completion of Breath of the Wild, I was free to singularly devote time to another game on the Switch. Next in the queue: I Am Setsuna.

Originally released for the PlayStation 4 and Vita in early 2016, Square Enix announced I Am Setsuna would be a launch title for the Switch shortly before the platform’s launch. The game was developed by Tokyo RPG Factory, a newly minted subsidiary of Square Enix with the primary intent of creating RPGs inspired by classics from the 1990s. The story and characters were fairly rote although a series of late game reveals caught me by surprise. Narrative and dialogue were compelling to the end, as was the soundtrack, which I’d go beyond and describe as exceptional! Lastly, the gameplay was immediately familiar thanks to the implementation of the Active Time Battle system. Considering the studio’s narrow purpose, I Am Setsuna was a success, albeit unambitious. END_OF_DOCUMENT_TOKEN_TO_BE_REPLACED

As far as Final Fantasy branded items go, Final Fantasy Chronicles is somewhat unique. It was only released in North America, sort of. This is a compilation of two games previously released in North America: Final Fantasy IV and Chrono Trigger. Both games feature additional content compared to their original SNES releases. Most of the additions are minor, but each game now includes an opening cinematic and Final Fantasy IV’s script has been revised. I haven’t played these versions, but I have played these games and without question, they’re highlights of the role-playing genre; specifically harkening back to of the most popular eras of the Japanese RPG.

Each game was originally developed by Square and these versions were ported by TOSE. Final Fantasy Chronicles was released for the PlayStation on June 29, 2001 courtesy of Squaresoft.

As I browsed GameFAQs, searching for these images, a revelation occurred to me. Final Fantasy IV is probably the most re-released game in the long-running series. That’s a fitting fate for it too. It was perhaps the major title to usher in the “golden age” of Japanese role-playing games. At the very least, it was the first game in the series that hinted at the forward momentum Square would have over the next decade-and-a-half with the genre. So, why don’t you join me as I explore the covers Square used to sell the game over the years.

The first thing I noticed when looking at the original box art Square used for FFIV is the lack of emphasis placed on Yoshitaka Amano’s artwork. The previous three games featured his renderings of warriors and princesses prominently. This go around though, you’d think he was relegated to the logo only. This wasn’t the case though; Square simply chose to highlight a different aspect of the character designs – the super deformed! It’s cutesy for sure and plasters some common job classes upfront, and I guess I like that they took a different route with it. Oh, and there’s Kain Highwind in Amano’s logo.

When they released it in America for the SNES a year later though, the American branch didn’t even try. It’s simple and it always catches my eye when I scour local game shops for good deals. Maybe it’s not so bad; it does catch my eye after all. They really had to pitch it to us though, didn’t they? They’ve got bullet points on the front of the box! It was released over here as Final Fantasy II since the second and third titles weren’t. This prevented much confusion. And releasing a dumbed-down version prevented much difficulty.

The game was first rereleased for the PlayStation in 1997. The Japanese box art sees a return to the styling’s of Amano. Cecil Harvey and Golbez are prominently featured, although honestly, it’s hard for me to distinguish the rest of the imagery, and even if that really is Golbez and not Kain. Regardless, Kain takes his place in the logo. Cecil definitely fronted a hair metal band before being cast for FFIV. The PlayStation version was released in America too, circa 2001. It was bundled with Chrono Trigger and released as Final Fantasy Chronicles. There’s not much else to mention about the box art.

Little known to many Western gamers, Bandai had a fortuitous deal with Square to rerelease Final Fantasy titles for their WonderSwan and WonderSwan Color. FFIV was released for the WSC in 2002. A decadent airship is featured in the background that was no doubt crafted by the illustrious Cid Pollendina.

FFIV would next see release on a Nintendo platform again – the Game Boy Advance. It was released as Final Fantasy IV Advance in Japan and America in December 2005, and six months later in Europe. The Japanese box art is simple. Gray silhouettes of Cecil and Kain flank the logo. Meanwhile the American and European release is much more colorful. These versions feature Cecil and Kain, as well as Rosa Farrell for the first time. The box art used for these regions hints at the love triangle between the cast. This is definitely Amano refining the “wispy lines” he’s known for.

A few years later, the game saw a full-scale remake into 3D. Originally released for the Nintendo DS in Japan in December 2007, it was released in the back-half of 2008 in America and Europe. It has since been released for mobile devices running iOS and Android systems as well, but those platforms don’t really have boxed games… Japan received another Amano box art, featuring a larger portion of the cast, including the Lunar Whale. Here in America, we received an ominous black box, which formed a holographic Golbez. Europeans received the same essentially. The only difference was the color palette.

Finally, FFIV was bundled together with Final Fantasy IV: The After Years and an interlude bridging the two titles as Final Fantasy IV: The Complete Collection. This was released for the PlayStation Portable in 2011 and was the version I played. I think Japan and Europe got the better box art with this release. A large portion of the cast is done in emotive poses, painted in a watercolor style very reminiscent of Amano’s work on the original three games in the series. America on the other hand received gray silhouettes of Cecil and Kain against a white background. This version was very reminiscent of the Japanese release of Final Fantasy IV Advance.

With a brand as strong as Final Fantasy, the box art doesn’t have to sell the game. This might explain why Square has felt the liberty to rerelease Final Fantasy IV with a multitude of different covers. With much variety for this one game, it’s hard to pick a single favorite. I really like the Japanese and European release of Final Fantasy IV: The Complete Collection. It’s probably the easy favorite. All of Amano’s artwork is awe-inspiring personally. Heck, the Super Famicom release is cool too, in a differentiated cutesy way. I’ll go with my easy favorite though – the Japanese and European releases of The Complete Collection.